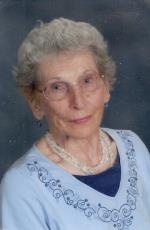 Wilma L. Piwetz, age 89, passed away on November 3, 2013 in La Grange.
Wilma was born on June 27, 1924, in the farm home near Weimar to William Rahlwes and Lenora Engels Rahlwes. She was a homemaker and member of St. Paul Lutheran Church in La Grange. She married James J. Piwetz, Sr. on May 7, 1945 in Weimar.
She loved Bible reading, loved her family, friends, roses, birds and dogs. She enjoyed working in the yard, riding her 3-wheel bike two miles a day, playing dominoes, did word searches every night, was President of the Bluff EH chapter for many years, a member of the women of the ELCA, quilting group and a volunteer at Second Chance.
Wilma is survived by three sons; James Piwetz, Jr. and wife Eileen of Midland; Gary Piwetz of La Grange; Warren Piwetz and wife Patricia of McKinney; one daughter, Cheryl Piwetz of Rockport; four grandchildren: Eric Greenwalt and wife Lisa of Mountain Home, Idaho; Julie Piwetz of Frisco, Texas; Jason England of Round Rock and Heather England of San Marcos; two great-granddaughters: Talitha Coombs and Alexis Coombs; numerous nieces and nephews and a sister-in-law also survive.
She was preceded in death by her parents; husband; a daughter, Phyllis England; brother, Otto A. Rahlwes and a sister Vera Grace Timeaus.
Visitation is scheduled for Tuesday, November 5, 2013, from 8:00 AM until 8:00 PM at Fayette Memorial Funeral Home in La Grange. The family will receive visitors from 6:00 PM until 8:00 PM.
Funeral services are scheduled for Wednesday, November 6, 2013, at 11:00 AM at St. Paul Lutheran Church in La Grange.
Interment will follow in the Weimar Masonic Cemetery.
Memorial contributions may be made to St. Paul Lutheran Church in La Grange, Hospice Brazos Valley in La Grange, Second Chance or the charity of one’s choice.

To order memorial trees or send flowers to the family in memory of Wilma Piwetz, please visit our flower store.