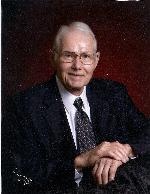 Walter was born June 23rd, 1934 in Rabbs Prairie, Texas to Walter Frank and Ida Mae (Tramp) Schumann. He was baptized in the Lutheran faith on July 31, 1934 and confirmed at St. Paul Lutheran Church in La Grange, Texas, on October 12th, 1947. Walter married the love of his life, Frances Pietsch, on September 12, 1953 in La Grange. He served in the Army Reserve and then the National Guard. The couple made their home first in La Grange, then Austin, Arlington, and finally in the Warda, Texas area. Walter was a mechanic by trade, working the bulk of his years for Braniff Airlines and then the LCRA. He was a man of great faith, serving throughout his years in many different capacities in the Lutheran church. Walter will be remembered for his complete devotion to God and family, his gentle kindness, and his quick grin.

Walter was preceded in death by his parents, Ida Mae and Walter Frank Schumann, his brothers Lambert Schumann and Gilbert Schumann, and his grandson Jon Davidson.

In lieu of flowers, memorial contributions may be made to Lutheran Hour Ministries (www.lhmgift.org) or charity of choice.

To order memorial trees or send flowers to the family in memory of Walter Schumann Jr, please visit our flower store.