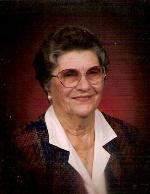 She was a housewife and she enjoyed spending time with her daughter, grandchildren and great-grandchildren.

She was preceded in death by her husband, Joseph Vaclavik; her parents, Joseph and Mary (Zatopek) Faldyn, three brothers, George, Wilbert and Joe Faldyn, Jr.; one sister, Isabelle Faldyn and mother-in-law and father-in-law, John and Anna (Kovar) Vaclavik.

To order memorial trees or send flowers to the family in memory of Vlasta Vaclavik, please visit our flower store.