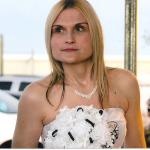 Stephanie (Chovanec) Cofer, age 36, of Cypress, passed away at her home on September 9, 2012.
Stephanie was born on February 25, 1976, in La Grange, to Peter Chovanec and Kathryn Seifert Chovanec. She married Joe Cofer in December of 2010 in Houston.
Stephanie was a dedicated teacher, loving wife and daughter. Education was very important in her life. She tutored students on weekends to further educate them for their future. Students were her life. Stephanie held a special place in her heart for animals, owning many over the years. She loved the weekends spent with family and friends. She and Joe spent time riding motorcycles together whenever they could. She will be greatly missed.
“Gone, but not forgotten, although we are not far apart. You will always be with us, for we have placed you in our hearts.”
Stephanie is survived by her husband, Joe Cofer of Cypress; parents, Pete and Kathy Chovanec of La Grange; two brothers, P. J. Chovanec and wife Nita of La Grange, Josh Chovanec and wife Candace of Monroe, LA.; grandfather, A. F. Seifert, Jr. of La Grange; stepchildren, Xavier Cofer, Kacee Cofer and Alisa Cofer, all of Houston, Chaunts Cofer of McAllen, Justin Cofer of Dallas, Ma Kinzey Cofer of Tyler; mother-in-law & father-in-law, Evelyn and Willie Cofer of Larue, four sisters-in-law; three brothers-in-law; numerous uncles, aunts, cousins, nieces and nephews also survive.
Stephanie was preceded in death by her grandparents, Ruth Ann Seifert, Peter A. and Stefina Chovanec and two brothers-in-law.
Visitation is scheduled for Thursday September 13, 2012, from 5:00 PM until 7:00 PM at Fayette Memorial Funeral Home in La Grange. The family will received friends from 5:00 PM until 7:00 PM. Rosary will be recited at 7:00 PM.
Funeral services are scheduled for Friday September 14, 2012, at 10:00 AM, at St. John’s Catholic Church in Fayetteville.
Interment will follow in St. John’s Catholic Cemetery in Fayetteville.
Memorial contributions may be made to St. John’s Catholic Church in Fayetteville or the Gardenia Janssen Animal Shelter in La Grange.

To order memorial trees or send flowers to the family in memory of Stephanie Cofer, please visit our flower store.