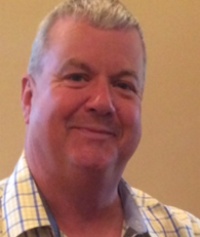 Stanley Johnston, Jr., 59, passed away June 2, 2015 in Muldoon, Texas. He was born March 15, 1956 in Houston, the third of five children, immediately dispensing with any misconception about overlooked middle children. Stanley made an impression on family, neighbors and acquaintances from an early age with his sense of adventure and mischievous smile. He could charm the socks off anyone lucky enough to make his acquaintance.
Stanley spent time working on the railroad but will be remembered as a salesman extraordinaire. He never met a stranger, building relationships in every room he entered, and conveying genuine warmth.
Stanley was first and foremost a Christian, and his faith guided every aspect of his life. No matter the obstacle, his trust in God never wavered.
Stanley is survived by his wife Shelly, of Muldoon, sisters Linda Johnston of San Leon, Janice Johnston and Elaine Hearn of Houston, and Evonne Honeycutt of League City, nephew Louis “Trey” Honeycutt of Syracuse, Utah, nieces Candice Reyes and Megan Foshee of Houston, sister-in-law Kelly Whitney and Todd Whitney of Houston, his beloved boxers Katie and Alissa and friends and fellow travelers of the road too numerous to count.
He was preceded in death by his father Stanley Johnston and his mother Helen Harper Johnston. A memorial service will be held on Saturday, June 6, at 2 p.m. at the Muldoon Baptist Church, 300 Cochran Street, Muldoon, TX, 78949.
Family suggests memorial donations be made to Walk in the Word, P.O. Box 5368, Elgin, IL 60121-5368.

To order memorial trees or send flowers to the family in memory of Stanley Johnston, Jr, please visit our flower store.