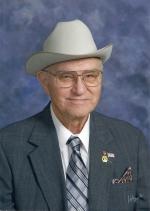 Stanislav Kana, age 88, of La Grange, passed away at his home on March 5, 2012.
Stanislav was born on March 15, 1923 to Frank Kana and Emilie Cernoch Kana. He married Lillian Janda on June 6, 1946.
He was a member of Holy Rosary Catholic Church in Hostyn. A welder by trade, he was a member of the Civilian Conservation Corps, worked in the shipyards, for Brown & Root and Texas Eastern, working in 15 states and overseas. He was the oldest living member of the CCC.
Stanislav is survived by three sons; Stan Kana and wife Elaine of Kingston Springs, Tennessee, Michael Kana and wife Becky of Stanford, Kentucky and Paul Kana and wife Leesa of La Grange. He is also survived by four grandchildren, six great-grandchildren, three brothers; John Kana of Houston, Willie Kana and wife Dorothy of La Grange and Frank Kana of Smithville; two sisters, Agnes Niesner of Swiss Alp and Rosie Hall and husband A. F. of La Grange; numerous nieces and nephews also survive.
He was preceded in death by his parents; wife, Lillian; sisters-in-law, Frances Kana and Emily Kana; brothers-in-law, Benjamin Niesner and Ben Kolek.
Visitation is scheduled for Thursday March 8, 2012, from 8:00 AM until 8:00 PM, at Fayette Memorial Funeral Home in La Grange. The family will receive visitors from 5:00 PM until 7:00 PM. Rosary is scheduled for 7:00 PM at Fayette Memorial Funeral Home Chapel.
Funeral services are scheduled for Friday March 9, 2012, at 10:00 AM, at Holy Rosary Catholic Church in Hostyn.
Interment will follow in Holy Rosary Catholic Cemetery.
Memorial contributions may be made to the La Grange Catholic Daughters Scholarship Fund.

To order memorial trees or send flowers to the family in memory of Stanislav Kana, please visit our flower store.