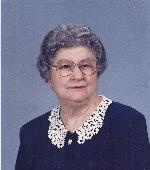 Selma Marie(Sally) Spaeth passed away on December 29, 2010, in Austin, Texas at the age of 93.
Sally was born on July 27, 1917 at Lincoln, Texas to Bernhard Paul Nowotnik and Martha Symmank Nowotnik. She married Louis A. Spaeth on November 16, 1944 at Alamo, Texas. Sally was retired from the Houston School System. She was a member of Sacred Heart Catholic Church, where she was also a member of the Altar Society.
Sally is survived by one daughter, Sheila Coufal and her husband Calvin of Fayetteville; two grandchildren, Chris Coufal and his wife Natalie of Fayetteville and Crystal Taska and her husband Dale of Midfield; one great-grandchild, Isabel Diane Coufal of Fayetteville; two sisters, Esther Donsbach of Brenham and Frieda Zuhn of La Grange. Numerous nieces and nephews also survive.
Sally was preceded in death by her parents, husband, a sister, Betha Orts and two brothers, Henry and John Nowotnik.
Visitation is scheduled for Thursday December 30, 2010, from 9:00 AM until 8:00 PM at Fayette Memorial Funeral Home in La Grange. The family will receive friends from 6:00 PM until 8:00 PM. Rosary will be recited at 7:00 PM at Fayette Memorial Funeral Home Chapel in La Grange.
Funeral services are scheduled for Friday December 31, 2010, at 10:30 AM at Sacred Heart Catholic Church in La Grange. Interment will follow at La Grange City Cemetery.
Memorial contributions may be made to Sacred Heart Catholic Church in La Grange, the Gardenia Janssen Animal Shelter in La Grange or to the charity of one’s choice.

To order memorial trees or send flowers to the family in memory of Selma(sally) Spaeth, please visit our flower store.