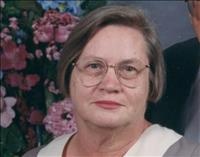 Ruby Irene Mach, 78, of La Grange, Texas, died at St. Mark's Hospital on February 23, 2015. Born March 15, 1936 in Muldoon, Texas, she is preceded in death by her parents Reuben Helton and Irene Fulkerson Helton of Muldoon, and her brothers James Helton of Traverse City, Michigan and Ben Helton of Brenham.

Ruby graduated from Flatonia High School in 1954 and married Stanley Mach on August 1, 1954 in the Methodist Church in Muldoon. They just observed their 60th wedding anniversary. Ruby was a homemaker and volunteered a good part of her life for the Travis Street United Methodist Church and 1st United Methodist Church of La Grange. She also served her community as a volunteer for the Fayette County Democratic Party. Her happiest role in life was being a grandmother. She loved teaching them to play dominos, cards, puzzles and games.
Survivors include daughter Cheryl Schmidt of La Grange, whose husband is Kenny Schmidt, daughter Susan Tully of Southlake, whose husband is Kevin Tully, and son Michael Mach of La Grange, whose wife is Tracy Mach. Grandchildren are Dena Meinardus of Bryan, Jamie Budnick of Houston, Luke Meinardus of La Grange, Bret Meinardus of Houston, Conor Tully of Southlake, Hayden Mach and Maddi Mach of La Grange. Ruby also has 5 great-grandchildren.

Visitation is at Fayette Memorial Funeral Home on Thursday, February 26th from noon to 7 p.m. The family will be there to receive visitors from 5 to 7 p.m. The memorial service is at the First United Methodist Church of La Grange on Friday February 27th at 10:00 a.m. In lieu of flowers the family asks donations be made to the following:

CASA of Bastrop, Lee and Fayette Counties
P.O. Box 623
Bastrop, Texas 78602
Or online at casaofbastrop.org.
Or donate to a charity of your choice.

To order memorial trees or send flowers to the family in memory of Ruby Mach, please visit our flower store.