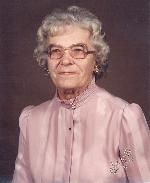 Ruby loved her family and all the special gatherings at holidays. She was an avid quilter having made each grandchild one. And spoiled everyone with her wonderful cinnamon rolls, Kolaches, and “Kafe Kuchen“. She loved gardening and her flowers. Above all Ruby loved God and was a wonderful example of a Christian and instilled all these special values in the family.

Funeral services are scheduled for Monday May 2, 2011, at 2:00 PM at Fayette Memorial Funeral Home in La Grange.

Interment will follow at the La Grange City Cemetery.

Memorial contributions may be made to the charity of one's choice.

To order memorial trees or send flowers to the family in memory of Ruby Kiesling, please visit our flower store.