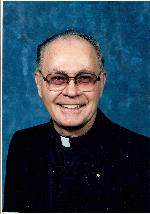 Msgr. Ben Mazurkiewicz was born on November 7, 1930 in Chappell Hill, Texas, the son of Tony and Josephine (Bilski) Mazurkiewicz. When he was two weeks old, the family moved to Brenham. He received his Elementary education at St. Mary’s School in Brenham. His first year of high school, was at St. Edward’s Military Academy in Austin. The following three years, he attended St. John’s Preparatory Seminary in San Antonio. Upon completion of high school, he enrolled at St. Mary’s Seminary at LaPorte. After six years at LaPorte, the old Seminary there was closed and the new Seminary at Houston opened where he completed the required studies for ordination to the priesthood. Father Ben was ordained at St. Mary’s Cathedral in Austin by the late Bishop Reicher (the first Bishop of the Austin Diocese) on May 28, 1955. Father’s first permanent assignment was at Sts. Cyril & Methodius Church at Granger. After seven years there he received his new assignment to come to Fayetteville. He arrived on February 2, 1963 and remained as Pastor of St. John’s for 39 years until his retirement in June of 2002. His was the longest tenure as Pastor in St. John’s year history. Fr. Ben also took care of Latium from 1963 to 1981. In June of 1980, upon the retirement of Fr. Kolar he lovingly embraced the assignment as Pastor of St. Mary’s of Ellinger and he continued to take care of St. Mary’s until his retirement. Fr. Ben’s other duties have included serving as Director of Youth for a number of years on the Deanery level. On the Diocesan level, he served as Dean of the Eastern Deanery, Priests’ Senate, Presbyteral Council and Personnel Committee. On February 8, 1985, Pope John Paul II appointed Fr. Ben as Domestic Prelate. While Pastor at Fayetteville, Fr. Ben was instrumental in the construction of numerous buildings on the church grounds beginning with the Sister’s convent in 1964, the new church in 1969, and continuing with many other improvements throughout his tenure. As Pastor of St. Mary’s of Ellinger, he was responsible for improvements to the church as well as building of the new parish hall.
In addition to his responsibilities as Pastor of two families, Father Ben enjoyed hunting, fishing, baseball, bowling, playing cards and dominoes and was an avid Dallas Cowboys fan.
Surviving Father Ben are two brothers, Msgr. Harry Mazurkiewicz of Fayetteville, J. T. Mazurkiewicz and wife, Irene of Brenham, and two sisters, Esther Kubeczka and husband Joe of Conroe, and Sister Florentine Mazurkiewicz, a Sister of the Divine Providence at Our Lady of the Lake Convent at San Antonio. A number of nieces and nephews, relatives and friends survive as do the many members of his church family.
Father Ben was preceded in death by his parents, a sister-in-law and a nephew.
Visitation is scheduled Tuesday May 25, 2010 from 6:00 AM until 11:00 AM at Fayette Memorial Funeral Home in La Grange.
Father Ben will lie in state from 12:00 PM until 6:30 PM at St. Mary's Catholic Church in Ellinger. Rosary is scheduled for 6:30 PM at St. Mary's Catholic Church, followed by Mass at 7:00 PM.
Father Ben will lie in state Wednesday May 26, 2010, from 6:00 AM until the funeral mass at St. John's Catholic Church in Fayetteville.
Funeral Mass is scheduled for Wednesday May 26, 2010 at 10:30 AM, at St. John's Catholic Church in Fayetteville. Burial will follow in the St. John's Catholic Cemetery.
Memorial contributions may be made to St. Mary's Catholic Church in Ellinger, St. John's Catholic Church in Fayetteville, or the Clerical Endowment Fund.
To order memorial trees or send flowers to the family in memory of Rev. Msgr. Mazurkiewicz, please visit our flower store.