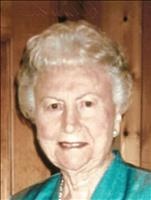 PAULA G. HEINSOHN
Funeral services for Paula G. Heinsohn, 97, of La Grange will be held at 2:00 p.m. Saturday, April 23, 2016 at the La Grange Church of Christ with Scott Elliott, officiating. An interment service will follow at the La Grange City Cemetery Pavillion. Visitation will be from Noon until 7:00 p.m. Friday, April 22, 2016 in the Fayette Memorial Funeral Home Chapel with the family present from 5:00 until 7:00 p.m.
Paula was born April 7, 1919 near Round Top, Texas to Hugo and Ella Reuter Giese. She married Edwin G. Heinsohn on September 12, 1943 at Bethlehem Lutheran Church in Round Top, Texas. He preceded her in death on March 17, 1988.
Paula was employed by the Fayette County Agricultural Stabilization and Conservation Service office for 35 years, and was a member of the La Grange Church of Christ.
She is survived by one son and daughter-in-law: Bobby and Carolyn Heinsohn of La Grange.
Two granddaughters and grandsons-in-law: Sandra Ites, and her husband, Stan of New Braunfels, and Kimberlee Henao and her husband, Eric of Houston.
Two great grand-children: Tyler and Kaylee Ites.
Two step-grandchildren: Chris Meiners and his wife, Tanya of Conroe, and Cheryl Dillon and her husband, Michael of Austin.
Two step-great-grandchildren: Jocelyn Brooks and Jordan Meiners.
Paula was preceded in death by her parents, her husband, and two sisters, Anita and Stella, three brothers-in-law and one sister-in-law..
Family suggests memorials to: American Cancer Society, P.O. Box 22718 Oklahoma City, OK 73123-1718 or the American Heart Association, 10900 Stonelake Blvd. #320 Austin, Texas 78759.

To order memorial trees or send flowers to the family in memory of Paula Heinsohn, please visit our flower store.