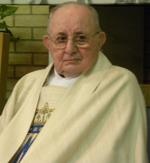 Msgr. Stanislaus Joseph Petru was born on Nov 22, 1922 in Shiner to Frank and Johanna Velek Petru and to a family which eventually consisted of 10 children, including three priests, Rev Augustine Petru, OMI of Mexico, the late Rev. Msgr. Julius Petru, and Msgr. Stanley J. Petru.

He is survived by two brothers, Rev. Augustine Petru, OMI and Robert Petru and wife Bernice of Houston, many nieces, nephews, and many friends.

He entered into St. John’s Seminary in San Antonio in 1937. He was ordained May 27, 1948, by the late Archbishop Robert E. Lucey. He celebrated his First Solemn High Mass in Raymondville at Our Lady of Guadalupe Catholic Church on Sunday, May 30, 1948, and was assisted by his two brothers, Rev. Julius A. Petru, who was then pastor of St. John’s Church near Schulenburg, and Brother Gus Petru, O.M.I., who was then a student in De Mozonod Scholaticate in San Antonio.

Msgr. Petru was a huge supporter of the youth and all activities involving young people. After each Sunday Mass he celebrated at Hostyn and Plum, he enjoyed giving children’s bulletins to his “bambinos” and they enjoy getting them. Some practically ran to get their copy. He was also known for his love of roses, birds and Christmas lights.

Upon retirement, Msgr. Petru moved to the Oblate Madonna Residence in San Antonio, TX, where he passed away on July 25, 2013.

Funeral services will be held on Tuesday July 30, 2013 at 11:00 AM at Holy Rosary Catholic Church in Hostyn.
Interment will follow in the church cemetery.

To order memorial trees or send flowers to the family in memory of Msgr. Petru, please visit our flower store.