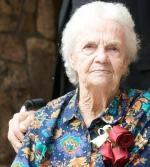 Minnie Schellberg, age 98, of Round Top, passed away on July 8, 2012 in La Grange.
Minnie was born on October 4, 1913, at Round Top, to Gerhard Bunjes and Laura Rohde Bunjes.
She married Charlie Schellberg on June 26, 1937, at St. John’s Lutheran Church in Warrenton.
She was a homemaker and a member of St. John’s Lutheran Church in Warrenton. Minnie and Charlie were active in the Round Top-Warrenton Volunteer Fire Department until they were eighty years old. They were also members of Der Frolich Gesang Verein (German Singing Group) for twenty five years. Minnie had a large garden, as gardening was one of her favorite pastimes. Minnie and Charlie loved to dance and they did so until the age of ninety one.
Minnie is survived by her husband of 75 years, Charlie of Warrenton; one son, Harry Schellberg of Round Top; two granddaughters, Julie Schellberg of Denver, Colorado and Laura White & husband William of Manchester, U.K.
She was preceded in death by her parents; one brother, Reinhard Bunjes and a daughter-in-law, Betty Zavada Schellberg.
Visitation is scheduled from 3:00 PM until 8:00 PM, Tuesday July 10, 2012 at Fayette Memorial Funeral Home in La Grange. The family will receive visitors from 5:00 PM until 8:00 PM.

Interment will follow at Florida Chapel Cemetery near Round Top.

Memorial contributions may be made to St. John’s Lutheran Church in Warrenton.

To order memorial trees or send flowers to the family in memory of Minnie Schellberg, please visit our flower store.