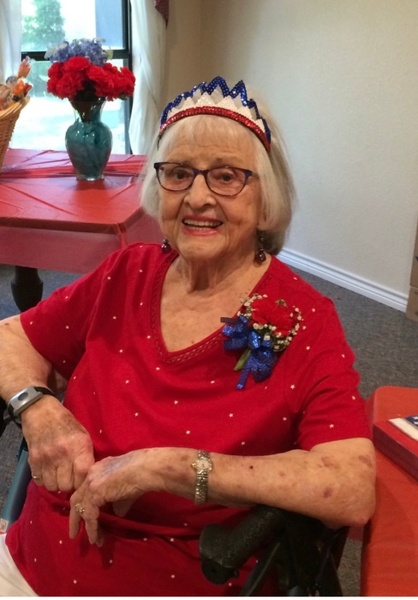 Mary Pauline Maguire McNair was born on June 14, 1928 to Ted and Pauline Maguire in Goose Creek, TX. She passed away in Austin, July 30, 2020.  Pauline was the oldest of four siblings.  Upon her graduation from high school in Hearne, Texas, during WWII, Pauline joined the Army Nurses Training Corps in Austin, Texas.  The war ended before her training could be completed and she returned to Hearne and worked in nursing.

Pauline married Marion Dixon McNair in November of 1947.  They had four sons; Marion Dixon Jr, John David, Timothy Duane, and Howard Douglas.  Pauline was active in Cub Scouts as a Den Mother for all four of her sons.  Pauline and her family moved frequently due to Dixon's work with Humble Oil and later Exxon.  They lived in Ingleside, Aransas Pass, the Humble Camp at Scott and Hopper, Corpus Christi, Houston, Portland and Buenos Aries, Argentina.  After Dixon's retirement from Exxon, they lived in Houston, College Station, Bryan and Katy.

Pauline and Dixon enjoyed touring the country in their motor home and were active members of their camping club.

Pauline is survived by her four sons and their wives, Dixon Jr. and Mary Lou of La Grange, Texas, David and Maria of Katy Texas, Duane and Betty Ann of Katy Texas, and Doug and Iris of Sugarland, Texas.  Pauline has four Grandsons, two Granddaughters, three Great Grandsons and one Great Granddaughter. She also had numerous beloved nieces and nephews.

Pauline would want all to know that she has had a wonderful, happy life centered around her family, friends and church.

In an abundance of caution, the services will be private and no visitation will be scheduled. In lieu of flowers the family requests donations to be made to St. Mark’s Medical Center Foundation One Saint Mark’s Place La Grange, TX.  78945

To order memorial trees or send flowers to the family in memory of Mary McNair, please visit our flower store.