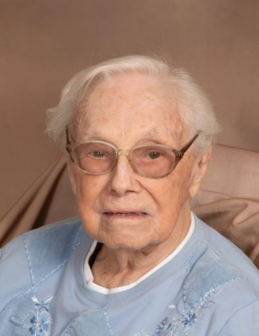 A visitation for Lorine Ruth Fischer, 98, of La Grange will be held from 5:00 p.m. until 7:00 p.m. Monday, November 30, 2020 in the Fayette Memorial Funeral Home Chapel.  Funeral services will be held at 11:00 a.m. Tuesday, December 1, 2020 at the Mt. Calvary Lutheran Church in La Grange with interment to follow in the Mt. Calvary Lutheran Cemetery.

Lorine was born November 15, 1922 in a log cabin near Warda, Texas, in southern Lee County, to Martha Tschatschula Wacker and Edward Wacker.  She worked in the cotton and corn fields with her parents and later, with her husband and children.  At 15, she and a cousin got on a bus and headed to Houston to look for work.  She found employment as a housekeeper and nanny for several years.  During World War II, she moved back to Warda with her daughter, Margaret, from her first marriage.  On November 30, 1950, Lorine married Edward Fischer adding 3 more children to the family.  She loved her children and husband.  She instilled the need for her children to get a good education because she did not have the opportunity to continue her schooling.

Later in life between farming duties, Lorine and Edward would love to go fishing along the Colorado River.  They usually came home with some fish.  She especially enjoyed fried catfish with buttered homemade bread.  While she was at the nursing home if someone asked how she was, she would always respond, “I’m ready to go fishing”.

In the mid-1990’s, she and her husband, Edward Fischer, moved into a house in La Grange which she called her “4 room mansion”.  She knew other women did great things and went many places, but she was content being a housewife and "crocheting her life away".  Many hours were spent crocheting various baby items, afghans, angels, and ornaments.  Just give her a pattern and she was able to make the item.  Many of these she gave away to family and friends.

Family suggests memorials to Mt. Calvary Lutheran Church or to a charity of one's choice.

To order memorial trees or send flowers to the family in memory of Lorine Fischer, please visit our flower store.