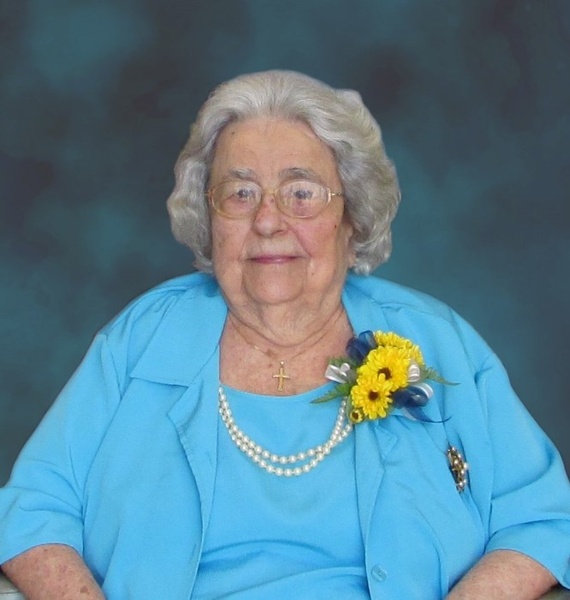 Lorine was born September 13, 1929 in Winchester, Texas to Martin and Alma Farrack Reinhardt. She was baptized on September 22, 1929, at St. Michael’s Lutheran Church in Winchester, Texas, and Confirmed there on April 18, 1943. Her confirmation verse was Luke 11:28:  “Blessed are they that hear the word of God, and keep it.” She passed from this life on February 6, 2018, at Colonial Bell Nursing Home in Bellville, Texas

Lorine married Ervin Biehle on November 20, 1949, at St. Michael’s in Winchester. He preceded her in death on May 12, 2014. She was a babysitter and a homemaker, and a member of Holy Cross Lutheran Church in Warda.

Lorine is survived by one son, Martin Biehle and his wife, Debbie of Bellville, Texas; one daughter, JoAnn Prause and her husband, Brian of Hostyn, Texas; two sisters, Mary Lehmann of Winchester and Gertrude Hobratschk of Giddings; one brother, Monroe Reinhardt and his wife, Betty of Pflugerville, Texas; four grandchildren, David Biehle, Allen Biehle, and his wife, Christy, Amanda Synnott Roy, and her husband, Jay, and Keith Synnott and his wife Janna; five great-grandchildren, Eric Biehle, Emily Biehle, Lauren Biehle, Garrett Biehle, and Blake Biehle; her sisters-in-law, Doris Reagan, Margaret Wachsmann, and Esther and husband Freddie Synatschk, as well as many nieces and nephews, cousins and friends.

She was preceded in death by her parents; her husband; one son-in-law, Milton Synnott; brothers and sister-in-law, Arnold Lehmann, Willie Hobratschk, Charles Reagan, and Martin and Alma Killian.

To order memorial trees or send flowers to the family in memory of Lorine Biehle, please visit our flower store.