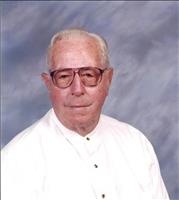 Lloyd “Leon” Twiford age 97 passed away on January 11, 2015 at the Texas State Veteran Home in Temple.
He was born on January 1, 1918 in Alvin, Texas to James Larimore Twiford and Cecil Webster Parker Twiford and moved to Houston in 1920. He graduated from Sam Houston High School in 1936.
He served in the United States Army from 1941-1946, attained the rank of Sgt. on an antiaircraft gun crew in the Pacific Theatre including Pearl Harbor, in the Leyte Gulf battle in the Philippines and the battle of Okinawa.
After his discharge from the Army in 1946, he and his father formed Twiford Printing Company. Retiring in 1973 at the age of 55, he and his wife Dorothy moved to Winedale to enjoy their golden years together and enjoy them they did.
He was preceded in death by his wife of 56 years Dorothy (Lemke) Twiford.
He is survived by his daughter Teryl Rozell of Austin; his son and daughter-in-law, Craig and Sue Twiford of Denver, Colorado; granddaughter, Karly Cruz of Aurora, Colorado; two great-grandchildren, Ricky and Juliana Cruz of Aurora, Colorado, numerous nieces and nephews also survive.
He was a past President of the Houston Craftsmen Club and the Carmine Lions Club.
Leon and Dorothy were members of the Martin Luther Lutheran Church in Carmine.
Visitation is scheduled for Wednesday January 14, 2015, beginning at 10:00 AM at Fayette Memorial Funeral Home in La Grange.
Funeral services are scheduled for Wednesday January 14, 2015 at 10:30 AM at Fayette Memorial Funeral Home in La Grange.
Interment will follow in the Richter Cemetery near Round Top.
In lieu of flowers, memorial contributions may be made to the Alzheimer’s Association, Capital of Texas Chapter, 3429 Executive Center Drive, Suite 100, Austin, Texas 78731.

You may view Leon's video tribute by clicking the following link:Video Tribute

To order memorial trees or send flowers to the family in memory of Lloyd Twiford, please visit our flower store.