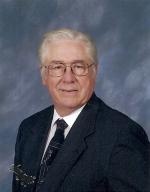 Lloyd Goehring, 83, of La Grange and Ledbetter passed away on November 12, 2012, at St. Mark’s Medical Center in La Grange.
He was born on February 1, 1929 in Fayette County, the son of Walter and Elsa Schultz Goehring. He was baptized September 22, 1929 and confirmed September 6, 1942 by Rev. Carl Baer. He was married to Joan Sue Hannes on November 27, 1951 by Pastor Emghbroff at Martin Luther Lutheran Church in Giddings.
After attending school in Walhalla and Round Top-Carmine, Lloyd moved to Houston and began his working career at Schuhmacher Company and then later with Railway Express. He then graduated from the Houston Police Academy on July 17, 1954 and served as a Houston Police Officer until his retirement.
Lloyd then returned home to Fayette County and began work as a Fayette County Deputy under Sheriff Jim Flournoy on January 1, 1978. In November 1978, he was elected Justice of the Peace, Precinct 1, Fayette County and re-elected in 1982. In 1986, he was elected Constable Precinct 1, Fayette County and served until full retirement in 1992.
Lloyd continued to be involved in the cattle business at his family farm in Ledbetter, as well as enjoying gardening, hunting, fishing and especially spending quality time with his five grandsons.
Lloyd was a member and past chairman of Waldeck Lutheran Church. He served as president of the Ledbetter Cemetery Association for 19 years and the Bell Settlement Cemetery Association. He was member of SPJST Lodge 179 of Warrenton, a Fayette County member of CAPCOG police officer training committee, member of Southwestern Cattle Raisers Association and the North Central Fayette County Wildlife Coop. He served as a volunteer for the Fayette County Fair Association, Fayette County Child Welfare Board and was a member of the Fayette County unit of the American Cancer Society, where he also was a volunteer driver for cancer patients.
Lloyd is survived by his wife of 60 years, Joan Sue; two sons and daughters-in-law, Glenn and Jane Goehring of Brenham and Ray and Cindy Goehring of La Grange; five grandsons, Lee Goehring of College Station, Josh Goehring and wife Miranda of Giddings, A. J. Goehring of Navasota, Brady Goehring and fiancé Jennifer Blend of Waco and Cody Goehring of Stephenville; two step-grandsons, Randy Fulton and Cory Fulton; sister-in-law, Mary Lou Goehring of La Grange; three nieces, Brenda George, Sybil Wright and Elsa Rooks; three nephews also survive, Karl Goehring, Randy Beck and Bobby Beck.
He was preceded in death by his parents; brother, Lester Goehring, an infant daughter and an infant granddaughter.
Visitation is scheduled for Wednesday November 14, 2012, from 8:00 AM until 8:00 PM, at Fayette Memorial Funeral Home in La Grange. The family will receive visitors from 5:00 Pm until 7:00 PM. A prayer service is scheduled for 7:00 PM.
Funeral services are scheduled for Thursday November 15, 2012, at 2:00 PM, at Waldeck Lutheran Church.
Interment will follow at the Ledbetter Cemetery.
Pallbearers will be Lee Goehring, Josh Goehring, A. J. Goehring, Brady Goehring, Cody Goehring, Karl Goehring, Norman Schultz and Rodney Read.
In lieu of flowers, memorial contributions may be made to Waldeck Lutheran Church Memorial Guild, Ledbetter Volunteer Fire Department or Hospice Brazos Valley.

To order memorial trees or send flowers to the family in memory of Lloyd Goehring, please visit our flower store.