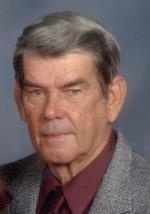 Leslie Giese, age 79, of Warda, passed away on Friday September 27, 2013, at Okland Manor Nursing Center in Giddings, TX after a long lengthy illness.
Leslie was born on August 25, 1934 at Warda to Louis A. Giese and Adelia Falke Giese. He was baptized and confirmed at Holy Cross Lutheran Church in Warda. He started working in construction right out of high school. In the early 60’s, he formed his own company, Giese Construction. Leslie was an avid baseball and softball player. He enjoyed fishing, hunting, bowling, gardening, being with his latest dog Pedro, and playing dominoes. Leslie served his church in various capacities throughout the years.
He is survived by his wife Gladys Bohot Giese, of Warda; daughters Roxanne Davis and husband Steve of Lawton, OK and Robin Wedgeworth and husband Curtis of Warda; four grandchildren, Jon Gooch and wife Carrie of Sachse, TX, Alison Parnell and husband Tim of North Richland Hills, Lesley Svrcek of Houston, and Miranda Blackmon of Houston; six great-grandchildren, Lexi, Laurie and Nicholas Gooch, Riley and Brisa Soto, and Carmyn Parnell; one sister, Della Lehmann and husband Robert of Warda; two nephews, David Lehmann and wife Linda of Warda, Douglas Lehmann and wife Lorie of Warda.

He was preceded in death by his parents Louis A. Giese and Adelia Falke Giese.

Funeral services will be held on Monday September 30, 2013 at 11:00 AM at Holy Cross Lutheran Church in Warda.

In lieu of flowers, memorial contributions may be made to Holy Cross Lutheran Church Cemetery Fund of Warda or Brazos Valley Hospice of La Grange.

To order memorial trees or send flowers to the family in memory of Leslie Giese, please visit our flower store.