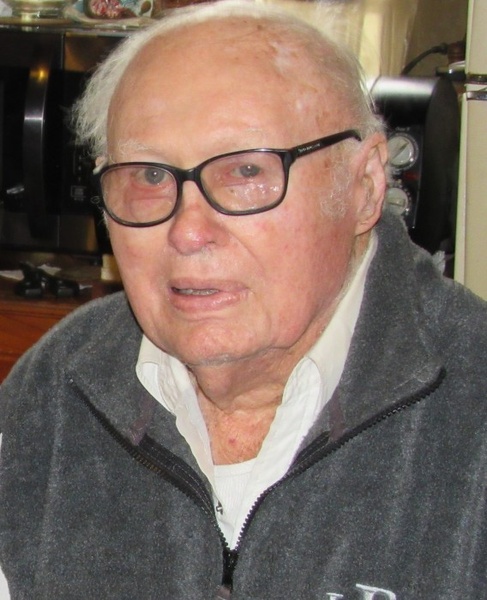 Leonard Petrich of Round Top passed away on July, 1, 2019 in La Grange.

The funeral for Leonard will be held on Friday July 5, 2019 at 10:30 AM at Fayette Memorial Funeral Home with Pastor Andy Smith presiding. Interment will follow at the La Grange City Cemetery.

Leonard Lake Petrich was born on April 20, 1922 in Houston to Fred John Petrich and Jessie Matzke Petrich. He was baptized and confirmed at Grace Methodist Church in Houston. He graduated from John H. Reagan High School in Houston in May 1941.

Leonard was a private 1st class anti-tank company, 405 infantry, 102nd infantry division in the U.S. Army during WWII. He drove the Red Ball Express and was near Berlin when the war ended. He served 1942-1946. He was awarded the American Theater Campaign Medal, EAME Campaign Medal, 2 Bronze Service Stars, Good Conduct Medal, Combat Infantry Man Badge, and the WWII victory Medal.

He Married Marilyn Anna Christen on March 17, 1949 at the Addicks Methodist Church in Addicks. They moved from Spring Branch to Fayette County on August 20, 1950 and started a Grade A Dairy Farm. After almost 25 years in the dairy business, he went into a stocker cow operation that continues even now.

The marriage was blessed with three children Jessie Marie, Alfred John, and Donna Louise. He was a member of the First United Methodist Church of La Grange.

Leonard passed away July 1, 2019 at the age of 97 years, 2 months and 10 days. He was preceded in death by his parents, his brother Glen, adopted sister, adopted brother, son-in-law Roger Kokemor, and daughter-in-law Cindy Foster Petrich

He is survived by his wife of 70 years Marilyn, daughters Jessie Kokemor of Brenham and Donna Burton of Round Top and son Alfred and wife Marilyn of Skull Valley, Arizona. He is also survived by grandchildren Carl Kokemor and wife Carey, Christine Kokemor Skala and husband Michael, Jonathan Burton and Michael Burton. There are also four great-grandchildren and other family and friends.

The family suggests memorial donations be made to the charity of one’s choice.

To order memorial trees or send flowers to the family in memory of Leonard Petrich, please visit our flower store.