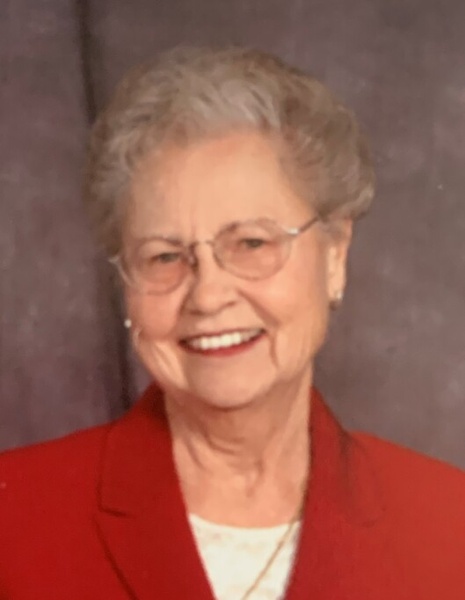 Ruth, known as “Tiny” by friends and relatives, was born January 25th, 1932, in La Grange, Texas to Louis Albrecht and Nancy Morris Albrecht. On July 16th, 1949, she married Herbert L. Hensel and the two settled down in La Grange. Ruth remained a lifelong resident of her hometown and enriched it with her presence.

A pillar of her life was her faith and Ruth was a very active member of St. Paul Lutheran Church in La Grange. Not only was she a Sunday school teacher, but she also sang in the church choir, joined by her husband and eventually all three of her children as well. Ruth enjoyed the monthly Afternoon Circle meetings, cherishing the time with her church family. Always giving of her time, Ruth’s volunteer activities through St. Paul Lutheran Church included monthly quilt tacking, helping with nursing home ministries, and joining the local Stephen Ministry team. She also joined with other Christian women in a weekly Bible study which she was thrilled to attend again in person a mere day before her passing. Every Friday night home La Grange Leopard football game, Ruth could be heard cheering for her team from the same stadium seat she occupied since 1967. She also enjoyed playing dominoes with friends and attending Swiss Alp Dance Club dances, even after the passing of her beloved Herb.

Ruth was preceded in death by her husband, Herbert L. Hensel, her sisters Virginia Jones and Ruby Mae Jaycox, and her daughter-in-law Kim Howes.

In lieu of regular remembrances, the family requests memorials to be made to St. Paul Lutheran Church in La Grange or the Moran Eye Center Kimberly A. Howes Fellowship at the University of Utah in memory of Ruth Hensel (John A. Moran Eye Center, Attention: Tawnja Martin, 65 Mario CapecchiDrive, Salt Lake City, Utah 84132).

To order memorial trees or send flowers to the family in memory of Leona Hensel, please visit our flower store.