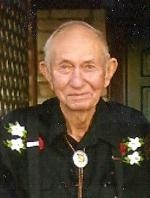 He was baptized and confirmed at Holy Cross Lutheran Church in Warda. In 1944 at the age of eighteen Leon joined the United States Army where he honorably served until 1946. On October 5, 1947 Leon married his sweetheart Lillian Noack at St. Michael’s Lutheran Church in Winchester. Over the years they were blessed with four children.

Leon had a great talent when it came to playing the fiddle. He loved music and to entertain, he was known far and wide for his musical skills. Leon enjoyed hunting and shared this with his children, grandchildren, and great-grandchildren. Fishing was another pastime of his but most of all he enjoyed spending time with his family.

Leon was preceded by his parents; grand-daughter Katie Teinert; 4 sisters and 1 brother.

Memorial services are scheduled for Monday March 14, 2011 at 2:30 PM at the Holy Cross Lutheran Church in Warda.

Memorial contributions may be made to Katie Teinert scholarship fund at La Grange High School.

To order memorial trees or send flowers to the family in memory of Leon Teinert Sr, please visit our flower store.