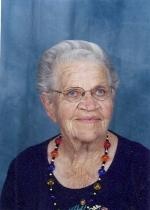 Leanda Frieda Menking Schlabach, 94, of Round Top, died Monday December 31, 2012 at Care Inn of La Grange.
Leanda was born on February 18, 1918, at Haw Creek, Texas, daughter of Otto F. and Selma Voelkel Menking. She was baptized at Evangelical Lutheran Church at Haw Creek on April 14, 1918 by Rev. H. Falkenberg and confirmed on July 31, 1932 at St. Paul’s Evangelical Lutheran Church in Los Angeles, Texas by Rev. H. F. Bomhoff. On April 23, 1961 in Round Top, Texas she married Milton Otto Schlabach.
Leanda was the oldest living person in Round Top at the time of her death. She grew up there and knew almost everything about the the town and could remember it too. If you wanted to know some history about Round Top just go ask Leanda and many people did. Several people wrote historical articles and books about Round Top and interviewed Leanda and took her picture at various landmarks. She worked in her sister and brother-in-law’s grocery store for 39 years and was proud of her ability to calculate math in her head and also, cooked in the first Round Top café owned by them. She loved to cook and won 1st place in 1951 Texas State Fair for her Orange Chiffon Layer Cake. Leanda was a very hard worker-always had a garden and had beautiful pecan trees in her yard which she spent many hours canning, preserving and shelling the bounty they grew. There was always a willing hand to help others and felt it was her obligation to do so. Confrontation was no stranger to Leanda, she was not shy and many would get offended by her outspokenness, but she said what she thought and was not afraid to offend someone with (what she thought) was the truth. She cared about others and liked to make people happy. As many have known hardship, so did Leanda caring for her husband many years through illness and doing all she could to bring in money for living expenses being very frugal with everything. She never wanted anything much for herself and shunned away from luxuries or new things. Almost everything she owned was second hand and she was happy to have it that way. She was very active in the DYD club and served as president for 10 years, also, she was a member of many local organizations being a member of Bethlehem Lutheran Church, Round Top-Warrenton Fire Department, Harmonia Hall at Shelby, Hermann Son Lodge 151 in Round Top and the Rifle Association Hall of Round Top.
Survivors include stepsons Bobby Schlabach and wife JoAnn of New Braunfels, Larry Schlabach and wife Donna of Centerville; many grandchildren and great-grandchildren also survive.
She was preceded in death by husband Milton O. Schlabach, parents Otto and Selma Voelkel, 4 sisters and 4 brothers.
Visitation is scheduled for Saturday January 5, 2013, from 12:00 PM until 2:00 PM at Bethlehem Lutheran Church in Round Top.
Funeral services are scheduled for 2:00 PM, Saturday January 5, 2013, at Bethlehem Lutheran Church in Round Top, with Rev. John David Nedbalek officiating.
Interment will follow at Shelby Cemetery in Shelby.
Memorial contributions may be directed to Bethlehem Lutheran Church, P. O. Box 38, Round Top, Texas 78954 and Shelby Cemetery Association, c/o Wendell Rudloff, 1691 Krebs Road, Fayetteville, Texas, 78940
Pallbearers will be Paul Bales, Litton Schlabach, Jonathan Castillo, Chris Johnston, Tracy Chapman, Rob & Will Brown.

To order memorial trees or send flowers to the family in memory of Leanda Schlabach, please visit our flower store.