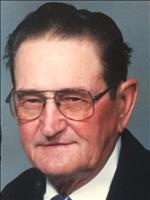 Lawrence was born in Hostyn, Texas on March 4, 1932, the son of Robert F. and Cecilia Janda Kallus. He married Bernice Zbranek on September 2, 1967 at Queen of the Holy Rosary Catholic Church in Hostyn.

After serving his country in the US Army during the Korean War, Lawrence was employed at South Texas Milk Producers Association and then worked for Steinmann Beer Distributing Company as a Route Man and Supervisor until his retirement. Lawrence was an avid bowler and enjoyed raising different types of birds for sale especially doves. He enjoyed attending social functions, farm chores, and helping his wife with the gardening and canning.

He was a member of Queen of the Holy Rosary Parish in Hostyn, KJT Society #3 of Hostyn, Veterans of Foreign Wars Post #5254 of La Grange, and an Honorary Life Member of the Knights of Columbus Chromcik Council #2574 of La Grange.

He is survived by his brother, Robert B. Kallus and wife, Lillian of Hostyn; sisters, Sister Josephine Kallus, OSB, Sister Mary Agnes Kallus, OSB, and Sister Virginia Kallus, OSB, all of Lisle, Illinois; brother-in-law Will Zbranek and wife, Carol of Fort Worth; and sister-in-law, Verlene Zbranek of Hallettsville; along with numerous nieces and nephews.

He was preceded in death by his parents; wife, Bernice who predeceased him on January 31, 2015; brother and sister-in-law Cyrill and Liola Kallus; sisters and brothers-in-law, Mary and Jerome Stavinoha, Betty and Edmund Stavinoha, Marcella and Reinhold Pircher, Cecilia and Edwin Kruppa, Sister Angelica Kallus, OSB, Sister Andrea Kallus, OSB; brother-in-law and sister-in-law, Bennie and Verlene Zbranek; and brother-in-law, Lad Zbranek.

Funeral services will be held at Queen of the Holy Rosary Catholic Church in Hostyn at 10 a.m. on Thursday, Feb. 26, 2015. Burial will follow at the church cemetery.

Fayette Memorial Funeral Home in La Grange is in charge of arrangements.

To order memorial trees or send flowers to the family in memory of Lawrence Kallus, please visit our flower store.