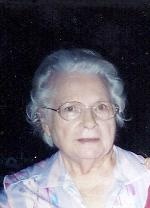 She was the last of the Blaha‘s “old” generation. Julia was born on December 21, 1919 in the community a between Flatonia and Praha, TX. She was one of the four children of Agnus Kerpic and Andrew Kallus. Julia grew up during the Great Depression. She was a living part of history, from the first Ford Model A, the first showing of Gone With the Wind to the cell phone and internet, she saw it all. Her family lived on a farm growing and picking cotton. Julia attended several of the local community schools in Ammansville, Dubina, and High Hill. In which she always told her grandchildren it was three miles to school and running from the neighbor’s bull or falling off the horse.

She met the love of her life Raymond A. Blaha. They were married at St. Peter and Paul Catholic Church in Plum and met many struggles as a young couple but always pulled through. Julia followed her husband during World War II to Denver, in which she worked in a factory making bullets for the soldiers, and several other assignments that Ray had during the war.

After the war they settled in Texas close to their families, which was always the first priority to them. Several years later they welcomed a son, Jerome Frank Blaha, their only child. They lived in Plum, Lancaster, Houston, and Johnson City, Texas.

After moving many times they moved to Johnson City , Texas during the 1960’s to be formen and set up ranch operations for one of the owners of the Humble Oil Company. The owners were not only their bosses but also became good friends of theirs. They were there almost twenty years. Julia and Ray raised their son there. In the 1970’s Ray decided it was time to return home. In which they bought land and built a home three miles from where he was born. Julia lived in this home until six months ago. She also worked at Care Inn, Cottonwood Restaurant and The Green Lantern in her later years before she was a grandmother.

Julia was a devoted and loving mother, grandmother and great-grandmother, aunt and friend to many people. She was always straight forward with you and always there to lend a hand if it was needed. She was there for several days after one of her great-grandchildren were born helping with the cooking, cleaning and care of the babies.

She enjoyed sewing, cooking and baking. She taught her granddaughter and great-granddaughters how to make kolaches and cinnamon rolls. The girls learned many things from her.

She gave many pieces of advice over the years, but her greatest was “regardless of what happens in your life you are still your father’s daughter” and the other was something John Blaha told his wife when they got married “we many not be rich, but we will always have family and food.”

Julia was a dignified and respectful woman, an upstanding person who was cherished and a loved one to many. The void she leaves behind will be hard to fill, but we who remain, although painfully sorrowed are confident in her place in God’s kingdom in heaven.Julia was a member of the Catholic Daughters and Altar Society at Sacred Heart Church.

She is preceded in death by her parents, husband, son and grandson, Andrew Frank Blaha. Her brothers Joe Kahanek and wife Elizabeth of Schulenburg and Jacub Kallus of Wisconsin, sisters and brothers-in- law; Mary Sivek and husband Frank, Anastasia Blaha and husband Louis.

Funeral services will be held on Thursday December 27, 2012 at 10:00 AM at Sacred Heart Catholic Church in La Grange.
Interment will follow in La Grange City Cemetery.

Memorial contributions may be made to Sacred Heart Church or School, Hospice Brazos Valley, Fayette County EMS or Fayette County Sheriff’s Department.
To order memorial trees or send flowers to the family in memory of Julia Blaha, please visit our flower store.