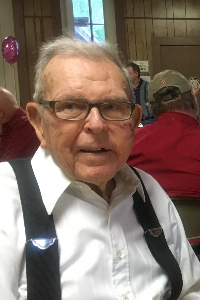 osie Fred (J.F., Joe, Joseph) Oppermann went to be with His Lord On Friday August 26th 2016 after he passed away at his home. Preceded in death by his parents and wife. We celebrate his birthday into the Kingdom of God and reunion with his beloved wife Phyllis Oppermann who preceded him in death in April 2004.

Josie Fred was born December 12, 1929 in La Grange, Texas, son of Elo and Hilda Oppermann. Josie attended La Grange High School and graduated in 1948. He was involved in the FFA and received several ribbons and awards for animals he raised.

Josie Fred served his country in the U.S. Army in the artillery and was stationed for a time in Germany. After spending time in the Army he returned to the La Grange area living just outside of Rutersville and continued raising cattle on the family farm. He also worked for over 17 years at the Fayette County Veterinary Clinic in La Grange.

He met Phyllis and they were married in 1979. He is survived by his daughters Lillian Mitchell, husband Roy and Bernadette Tipton, husband Mark, five grandchildren, five great-grandchildren, and numerous cousins.

He was a member of St. John’s Lutheran Church in Rutersville which is one of the churches of the Shared Lutheran Ministry.

Josie and family want to thank Pastor Marcia Kifer and all of the members of the St. John Lutheran Church for all their prayers and support during his last days.

Visitation is Monday August 29th 2016 from 12pm to 7pm , also the Family will be there from 5pm to 7pm at Fayette Memorial Funeral Home to share great memories about Josie Fred.

Funeral Services will be held on Tuesday August 30, 2019 at 3 pm at St. John’s Lutheran Church in Rutersville with Pastor Marcia Kifer officiating. Burial will follow at La Grange City Cemetery in La Grange.


To order memorial trees or send flowers to the family in memory of JOSIE OPPERMANN, please visit our flower store.