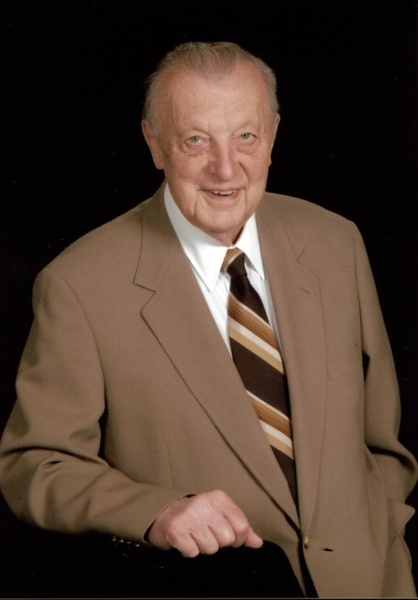 Joseph Charles Hild of La Grange was born in Baltimore, Maryland on February 21, 1923 to Joseph Conrad Hild and Anne Spahn Hild. He died at home with loving family by his bedside on September 21, 2017. He was preceded in death by his parents and sister, Marian Oxley. Visitation will be held on Sunday, September 24, 2017 at 2 P.M. – 7 P.M.  at Fayette Memorial Funeral Home. The family will be there from 5 P.M. – 7 P.M. a Rosary will be at 7 P.M. Funeral services will be held on Monday, September 25, 2017 at 2 P.M. at Holy Rosary Catholic church in Hostyn. The Interment will follow at Holy Rosary Cemetery, Hostyn.

Joe attended Holy Trinity High in Norfolk and Virginia Tech before joining the Air Force in 1942. He was trained as a navigator on B-17s and flew 35 heavy bombing missions over Europe. He was awarded the Distinguished Flying Cross and the Air Medal with four Oak Leaf Clusters. Joe retired from the service after 20 years with the rank of Major.

After the war he returned to Virginia Tech to earn a Bachelor’s in Civil Engineering and a Master’s in Environmental Engineering.  He then formed his own company in Houston and worked as a consultant for many small cities and water districts around Texas and Louisiana.  A group from Fayette County hired him to help with the Frisch Auf development, including a country club, golf course and water district. He designed and started the first well and section of the Fayette County Water System. He retired in 1988.

Joe was a member of Queen of the Holy Rosary Church in Hostyn, Knights of Columbus, Fourth Degree, The Equestrian order of the Holy Sepulchre of Jerusalem, VFW, American Legion and 388th Bombardment Group (H) Assoc.

To order memorial trees or send flowers to the family in memory of Joseph Hild, please visit our flower store.