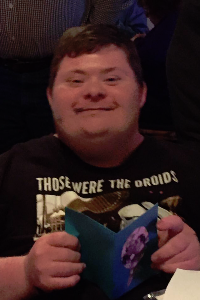 Our ‘JM ‘ danced through the gates of heaven on Tuesday afternoon at 1:25pm, after a very short and unexplained illness. His sweet soul was met by an honor guard of friends and relatives, including his Grandma and Pappy (Theresa & Frank Heedles of Primrose Pa), his Grandpa John (John O’Dell of Bournemouth England),His GodFather (Dr. Keith Fredericks of Houston) and his precious friends, Sara Rodriguez (Houston ) ,Brittany Ridley(Roundtop Texas) and his favorite dog, Lucky.
He brought joy to the lives of many and was our greatest teacher. There are enough ‘JM’ stories to fill a book and it seems that everyone has one to share….from the time he ran from school to find his friend Robert to the time he managed to unscrew our gas meter (much to the amazement of our local gas company). He loved his dog Lucky who he claimed was like a ‘brother’ to him (as he has four sisters) and the list goes on….
His wishes for the future were simple but consistent:
1- To have a girlfriend and get married
2- To own a truck
3- To have a son or twins
4- That one of his sons be named Stefan John Michael
Well, he found the sweetest girl when he found Jessica, decided he couldn’t drive just yet and named his new puppy Stefan !
John Michael was easily affected by the feelings of others. If my day happened to be slightly ‘off’, he would give me a hug and tell me to “let it go”, “in the past”. Good advice! He was a charmer and a worrier. On a good day, he would open doors for us, bow down and say (with his nicest British accent) “after you” (with a wide grin on his handsome face). Lately he would ask for a “family meeting” almost daily. This meant that we all sat together at the table while he brought out his latest concern, which was almost always about how much coca-cola he “needed”. We will raise our cans of coke to toast him today and pray that he will watch over us from above.

JM has left behind his parents, Ann and Michael O’Dell of Houston, His sisters, Emma O’Dell ( Houston), Fiona May, husband Jared May and Son, Jude May (Lubbock, Texas),Faye Rowe, her husband Ian Rowe and children Isobelle and Finn and Nina Stephen, her husband Bob and children Thea and Harvey. He also has left a beautiful young woman , Jessica and his new puppy, Stefan.
It would be an understatement to say that we all miss him terribly. Our hearts are broken but our memories will continue to bring smiles. God took his angel back much too soon for our liking, but what do we know?

To order memorial trees or send flowers to the family in memory of JOHN O'DELL, please visit our flower store.