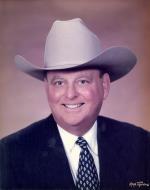 John Taylor Cook III parked the John Deere one last time on Monday December 9, 2013. He was surrounded by his family and friends.
John was born in Galveston, Texas on October 13, 1937. He attended Elementary and middle school there before going off to Andover for prep school. He later graduated in the last class of Rice Institute, now known as Rice University.
After a stint in the United States Marine Corp, John began his lifelong career in the Insurance industry. He started with Pike & Associates and eventually retired as a partner with John L. Wortham & Sons. His career carried him to all corners of the earth. His knowledge of his trade and integrity in business garnered him a long list of lifelong colleagues, clients and friends.
He would tell you his greatest accomplishments began on February 1, 1960 when he married Judith Rives. They had many wonderful times throughout their 50+ years of marital “bliss”. Together they had two sons John T. Cook IV and Jason Rives Cook.
When not working or keeping the peace at home, John enjoyed hunting and fishing. He was an outstanding wing shooter and his passion was duck hunting at the Port Bay Hunting and Fishing Club where he served as President and is now an honorary Life Member.
John was a proud member of the Tejas Vaqueros.
John’s many charitable contributions were highlighted by 40 years with the Houston Livestock Show & Rodeo. He had humble beginnings as a Committeeman on the International Committee and rose to Lifetime Member of the Executive Committee. His Rodeo Room at the ranch is full of memories and mementoes from all those he met.
After his retirement, John spent much of his time at his beloved C4 Ranch in Holman, Texas. He rode horses with Judy, worked cattle with Jason and Tad, cut trees with his brother Robert and sang polka in his John Deere.
John was preceded in death by his mother and father M L and Virginia Cook and his brother Terry Allen Cook. He is survived by his wife Judy Cook, sons Tad and Jason, brothers Robert Cook and Clark Cook and two grandchildren Claire and Taylor.
A memorial service will be held at St. Thomas’ Episcopal Church on Friday January 3, 2014 at 10:00am. The church is located at 4900 Jackwood, Houston, Texas.
In lieu of flowers, the family wishes for donations to be made to Houston Livestock Show General Scholarship and/or the Methodist Hospital Foundation.

To order memorial trees or send flowers to the family in memory of John Iii, please visit our flower store.