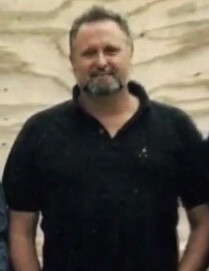 John Franklin Brewster, 68 yrs of age, left this life and joined the Lord on November 26, 2020 after a courageous battle with PSP – progressive supranuclear palsey.    John  was born to Albert Frank Brewster and Ellen Irene Morgan Brewster on November 25, 1952.  He was preceeded in death by both of his parents and his younger brother, Albert.

John is survived by his significant other, Margie McKee and 5 children and 6 grandchildren: Jennifer Dendy,  husband Charlie and children Sarah and Chas;  Melody Goerlitz,  husband Billy, and daughter Kayla;  Marshall Brewster, wife Jolynn, and children Scott and Cain;  Sara Brewster and daughter Ellie; and Dustin Brewster.   He has three sisters: Edna Chambers and husband John,  Patsy Alford and husband Mike, and Cindy Guess and husband Mike along with numerous nieces and nephews, great nieces and nephews, and other relatives.

John followed in the footsteps of his father and became a successful surveyor in Waller, Washington ,  and Harris Counties eventually owning and operating his own business and servicing hundreds of clients.  He sold his business and moved to Alabama, started a new career in concrete project management  and pursued his primary love of music composition.  John had been blessed with a God-given talent of hearing a tune within his mind and composing accompanying verses all within an extremely short period of time.  He was an accomplished 12 string guitarist who often left his audiences questioning if there had been a second guitar(ist) accompanying him because of the harmony which evolved from his own fingers.

John had volumes of poetry and over 1000 songs that he had written over the years.   In addition to a local television show while in Alabama, John represented the Gaither Brothers at the Gospel Music Awards in 2007 playing 7 of his own compositions.  But, perhaps his greatest accomplishment was responding to a request from the City of Huntsville, Alabama to construct an acre large wooden playscape using volunteer labor and donated materials.  On November 25,  1995, Kids’ Space was dedicated.  A bronzed plaque at the entrance bears this inscription written by John F. Brewster:

“Few things we do will last a lifetime, even fewer trap the soul, but here we bound our hearts forever….here we shall never grow old…. through glowing smiles of little faces and through new friendships we embrace….God bless this Labor of Love – with eyes that shine above: For your little children Lord….Kids’ Space”.

John requested to be cremated and his ashes spread within the mountains.

To order memorial trees or send flowers to the family in memory of John Brewster, please visit our flower store.