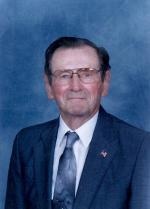 Jesse was born in Fayetteville, Texas on July 11, 1923. He grew up in Fayetteville and attended La Grange schools. In 1948, he joined the U. S. Army, serving tours of duty in Korea and Japan. He was honorably discharged in 1952.

On April 9, 1949, he married Mabel Ruth Niemeyer in Atlanta, Georgia. His only child, Bruce Wayne Schielack was born on October 29, 1950 in La Grange, Texas. After his discharge from the Army, the family resided in La Grange, Bastrop, and Houston. In 1981, he retired from Wahlberg-McCreary Wholesale Auto Parts in Houston after 38 years in the auto parts business.

Jesse and Mabel then returned to their little farm at Park, Texas where they resided until his passing. They enjoyed ranching, dancing, bingo, lotto, and much more. He was a life long Catholic and a long time member of St. John the Baptist Catholic Church in Fayetteville, Texas.

Funeral services are scheduled for 10:00 AM, Friday September 30, 2011 at St. John’s Catholic Church in Fayetteville.

Memorial contributions may be made to St. John’s Catholic Church in Fayetteville or charity of one’s choice.

To order memorial trees or send flowers to the family in memory of Jesse Schielack, please visit our flower store.