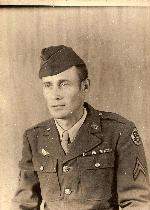 Jerry R. Zbranek passed away in La Grange on December 2, 2009, at the age of 93.
Jerry was born on September 3, 1916 in La Grange.
Jerry was a lifelong resident of the La Grange area and a member of St. Peter and Paul Catholic Church in Plum.
Jerry was a farmer and a World War II veteran.
While in the service, Jerry earned the European African Middle Eastern Ribbon with Three Bronze Stars, Good Conduct Medal, Purple Heart Medal, and One Overseas Service Bar.
Jerry is survived by two sisters; Rosalie Kollaja of El Campo, and Bernice and her husband Walter Divin of La Grange. He is also survived by one nephew, Edward Kollaja of Stafford; one niece, Betty Jean Regan of Austin and one step-nephew, David DeMarco and his wife Kathy, of La Grange. He is also survived by a sister-in-law, Bessie Zbranek of La Grange.
He was preceded in death by his parents, infant brother, Bennie Zbranek and infant brother, Janek Meyer.
Visitation is scheduled for Friday December 4, 2009, from 8:00 AM until 8:00 PM at Fayette Memorial Funeral Home in La Grange. The family will receive visitors from 5:00 PM until 8:00 PM.
Services are scheduled for 11:00 AM, Saturday, December 5, 2009, at St. Peter and Paul Catholic Church, in Plum. A rosary will be recited at 10:30 AM, prior to the service, at the church. Burial will follow in St. Peter and Paul Catholic Cemetery.
Memorial contributions may be made to St. Peter and Paul Catholic Cemetery or to La Grange Volunteer Fire Department.

To order memorial trees or send flowers to the family in memory of Jerry Zbranek, please visit our flower store.