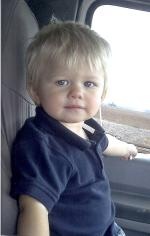 James D. Johnson Jr, 20 month old son of Jimmy and Trisha Johnson, of Winchester, passed away of complications due to liver failure on Saturday December 17, 2011 at Texas Children’s Hospital in Houston.

Lil’ Jimmy, also known as Nu-Nu’s, was always such a happy and healthy baby boy. His sudden and unexpected liver failure took the family as a total surprise. He spent his days at home playing with hot wheels, toy guns, monster trucks, and coloring. Lil’ Jimmy loved to play with his big brother, who he called his “Bubba.” They would wrestle and tear up the house from one end to the other. Yo Gabba Gabba and Thomas the Train were usually always playing on at least one TV in the house. He was a joy here on Earth and will be greatly missed. But we know God, along with Aunt Brigitte and Pops, are taking great care of him until he is one day reunited with his family.

Survivors include parents Jimmy and Trisha Johnson of Winchester, brothers Jordan and Jagger Johnson. Grandparents are Paul and Rose Gillaspia of La Grange and Billy Don and Rosie Johnson of Rosanky. Aunt and Uncles include Amanda and Billy Don Johnson Jr of Rosanky, Codi and Brandon Johnson of Rosanky, and Mandi and Craig Steiner of Alvin. Great Grandparent include Pauline and Glenn Gillaspia Sr of La Marque and Tony Hernandez of Dilly; along with numerous cousins.

He was preceded in death by his Aunt Brigitte Gillaspia, Great-Grandmother Cruz Hernandez, and Great-Grandparents Jim and Billie Jean Johnson.

Funeral services are scheduled for 10:00 AM, Wednesday, December 21, 2011 at the First Presbyterian Church of La Grange.

Memorial contributions may be made to help defray funeral expenses.

To order memorial trees or send flowers to the family in memory of James Johnson, Jr, please visit our flower store.