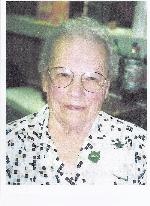 Irene Goehring Noak, of La Grange, passed away at Care Inn in La Grange, Texas on December 10, 2010, at the age of 93.
She was born on June 11, 1917 southwest of Round Top to Otto Goehring and Louise (Hoffmann)Goehring. She was baptized and confirmed at St. John's Lutheran Church in Warrenton. Irene and Nelson Noak were married on March 9, 1941 at St. John's Lutheran Church in Warrenton.
Irene and Nelson lived most of their life in Rutersville and raised four children; Ira Nell, Nelson, Jr., Wayne and David. They moved to La Grange in 1985 and spent the rest of their time together in La Grange. She was a member of St. John Lutheran Church in Rutersville and a member of Sons of Hermann Lodge #152 Rutersville.
Irene spent many years working at Franklin Nursery in La Grange. She loved her garden and her flowers. Irene enjoyed her family and family gatherings. She would cook everyone their favorite food. Irene enjoyed growing vegetables in the garden and spent the majority of her time outside caring for her garden and flowers. She canned everything she grew in her garden.
Survivors include three sons; Nelson Noak, Jr. and special friend Annegret Goehring of Danbury, Wayne Noak and wife Sherry of Rutersville and David Noak and wife Mary of La Grange. She is also survived by eight grandchildren; Randy Schneider and wife Candy, Beverly Hollis and husband Bobby, Destin Noak and wife Tory, Debra Steinbach and husband John, Celia Marie Kovar and husband Matthew, Tammy Naumann and husband Eric, David Noak, II and Gregory Noak and wife Christy. Sixteen great-grandchildren and one great-great-grandchild also survive. Irene is survived by brother-in-law Nolan Noak and wife Vernell, sisters-in-law, Charlotte Helfenstein, Nola Goehring and Neva Noak, along with numerous cousins, nieces and nephews.
She was preceded in death by her parents, Otto Goehring and Louise (Hoffmann)Goehring, her husband, Nelson Noak, Sr., daughter, Ira Nell McCoy, daughter-in-law, Shirley Noak, one great grandson and her four brothers; Wilhelm(Bill), Leroy, Elmer and Lorenz Goehring and his wife Nelda.
Visitation is scheduled for Monday December 13, 2010, from 8:00 AM until 8:00 PM at Fayette Memorial Funeral Home in La Grange. The family will receive friends from 5:00 PM until 8:00 PM. A prayer service is scheduled for 7:30 PM at Fayette Memorial Funeral Home Chapel in La Grange.
Funeral services are scheduled for Tuesday December 14, 2010, at 10:00 AM at St. John Lutheran Church in Rutersville. Interment will follow at Florida Chapel Cemetery, near Round Top.
Memorial contributions may be made to St. John Lutheran Church in Rutersville, 5743 St. Highway 159, La Grange, Texas 78945.
To order memorial trees or send flowers to the family in memory of Irene Noak, please visit our flower store.