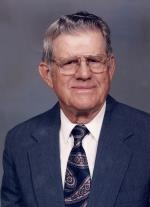 Herman Charles Weigelt, 89, of Round Top, died January 16, 2014 from complications of a Christmas Eve stroke.
Funeral services will be held on Monday, January 20th at 11:00 a.m. in Bethlehem Lutheran Church, Round Top with Rev. John David Nedbalek officiating, with interment at Florida Chapel Cemetery.

Born in Round Top, Texas on July 9, 1924, the son of Ewald and Ellie (Schulze)Weigelt, he was baptized and confirmed at Bethlehem Lutheran Church. He married Julie (Mache) Weigelt on June 5, 1954 and would have been married 40 years at the time of her death.

Herman served in the U.S. Navy LCS and LCT Flotilla Six in the South Pacific during World War II. He worked as a journeyman carpenter for H. A. Lott, retiring after 40 years of service, working on several Houston landmarks, including Gulfgate Mall, Houston's first shopping mall, the Astrodome, Summit and many others. Upon retirement he returned to Round Top and became a full-time rancher.

Memorials may be sent to the Round Top-Warrenton Volunteer Fire Department, P. O. Box 145, Round Top, Texas 78954.

To order memorial trees or send flowers to the family in memory of Herman Weigelt, please visit our flower store.