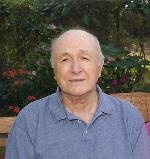 Harold Joseph Munsch passed away on Sunday July 4, 2010, at his home in La Grange.
He was born to Elo G. Munsch and Bessie (Goerig) Munsch on December 22, 1926, in Fayetteville, Texas. He served in the Army at the end of World War II.
Harold married Angeline Wostarek on March 27, 1951. This union was blessed with four children, two boys and two girls. Harold was employed at the First National Bank in La Grange for 34 years and held the position of vice president at the time of his retirement in 1990.

Harold was a member of Sacred Heart Catholic Church and the Knights of Columbus and was a Fourth Degree Knight. He served as Financial Secretary of KC Council #2574 for many years. He also belonged to the KJT, Holy Name Society, and La Grange Rotary Club. He served on the Sacred Heart School Board, the Sacred Heart Pastoral Council, and the Fayette Water Supply Board. He also coached Little League baseball.
He leaves behind his wife of 59 years, Angeline Munsch; two sons, Joseph Munsch and wife Glenda of Fayetteville, Bernard Munsch and wife Alicia of Kyle; two daughters, Rebecca Munsch and Catherine Zingelmann, both of La Grange; and grandchildren, Craig Zingelmann of La Grange, Megan and Michael Cooper of Schulenburg, Candice and Doyle Hall of La Grange, Mark Munsch of Fayetteville, Courtney Zingelmann of La Grange, and Emerson Munsch of Kyle. He is also survived by great grandchildren Kadyn Hall of La Grange and Haylie, Holdyn, and Haedyn Cooper of Schulenburg; and a brother Daniel Munsch and wife Annie of Columbus; a sister, Clementine Wostarek of Columbus; sisters-in-law, Rose Wilde of Willow Springs, Isabel Blanton and husband Merle of Sedona, Arizona, Edith Evanicky of Wharton and a brother-in-law James Wostarek of La Grange.

Memorial contributions may be made to the Sacred Heart School Endowment Fund or the Charity of One's Choice.

To order memorial trees or send flowers to the family in memory of Harold Munsch, please visit our flower store.