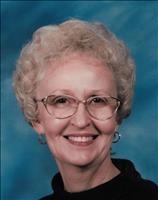 Gladys Von Minden was born on July 29, 1928 on her parents’ farm at Greens Creek near Giddings, Texas, the eighth of ten children of Hermann Lehmann and Emma (Pietsch) Lehmann. She was baptized in Bethany Lutheran Church of Greens Creek. On April 26, 1942, she was confirmed in the same church by Rev. Paul C. Eifert with Psalm 27:1 as her confirmation Bible verse: “The LORD is my light and my salvation; whom shall I fear? The LORD is the strength of my life; of whom shall I be afraid?”

Gladys was united in marriage to Werner William Von Minden on July 11, 1948 in Bethany Lutheran Church of Greens Creek. Their marriage of 49 years was blessed with two children.

Gladys is remembered and admired for her unwavering Christian faith and for her love and dedication to her family. She was a member of Zion Lutheran Church of La Grange, now Mt. Calvary Lutheran Church and Preschool. Her love and support of her children, grandchildren, and greatgrandchildren were tireless. Gladys was an excellent homemaker, and she particularly enjoyed baking and taking care of her potted plants, her yard, and her vegetable garden.

Since December, 2012, Gladys resided in Victoria, Texas, at White Oaks Personal Care Home where she received loving care from Donna Howell and her staff.

To order memorial trees or send flowers to the family in memory of Gladys Minden, please visit our flower store.