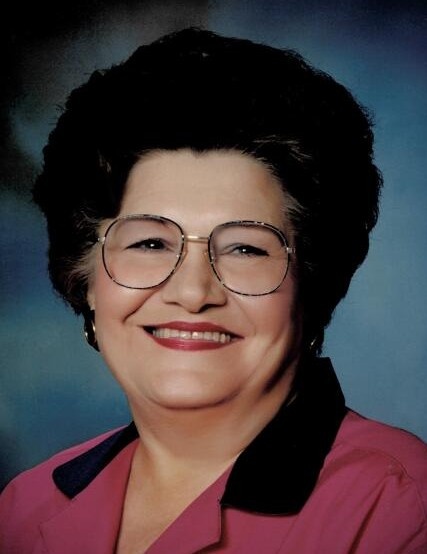 Georgia Faldyn Belota age 92, passed away on her birthday, January 30. She was born to Joseph Faldyn and Mary (Zatopek) Faldyn on January 30, 1930 in Holman, Texas. She married Joe L. Belota on November 9, 1948, in Holman, Texas at St. Wenceslaus Catholic Church.

Georgia had a passion for baking and cooking for her grandchildren and great-grandchildren. She also enjoyed gardening and being outdoors.  She was a devoted Catholic and was a parishioner of Sts. Peter & Paul Catholic Church in Plum. Also, she was a member of KJZT and the Plum Altar Society.

She is survived by her son Dennis of La Grange; daughter and son-in-law Beverly and Gene Kruppa of Plum; three grandchildren, Stacy Wahle and husband Tom of The Woodlands; Elliott Kruppa and wife Jennifer of Houston; and Brooke Belota of La Grange; four great-grandchildren, Nathan and Caroline Wahle and Elijah and Claire Kruppa; one sister Lillian Zapalac of Ellinger; two brothers Jerry Faldyn and wife Vlasta, and Edward Faldyn and wife Helen,  all of Columbus, one sister-in-law Virginia Faldyn of New Ulm; and numerous nieces, nephews and cousins.

In lieu of flowers, the family requests that memorial donations be made to the Sts. Peter & Paul  Catholic Church Building or Cemetery Fund, 126 Plum Church Road, Plum, Texas 78952, or to a charity of your choice.

Visitation will be held Tuesday, February 1st from 9am-5pm at Fayette Memorial Funeral Home in La Grange. On Wednesday, February 2 at Sts. Peter and Paul Catholic Church in Plum, the family will receive visitors from 9am-10am. A Rosary will be recited at 10am, followed by the funeral service officiated by Rev. Felix Twumasi and Msgr. Daniel Kahlich. Interment will follow at the Plum Catholic Cemetery.

In lieu of flowers, the family requests that memorial donations be made to the Sts. Peter & Paul  Catholic Church Building or Cemetery Fund, 126 Plum Church Road, Plum, Texas 78952, or to a charity of your choice.

To order memorial trees or send flowers to the family in memory of Georgia Belota, please visit our flower store.