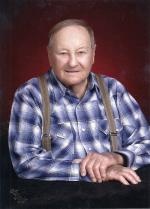 Fred C. Knippel Jr., age 88, of New Ulm, passed away on Wednesday November 9, 2011, peacefully after a long battle with cancer.

Fred was born on January 8, 1923, in La Grange, Texas, to Fred and Wilma Hetzel Knippel Sr. He attended Texas A&M and was a member of the Corp of Cadets. It was at this time Fred was drafted into the United States Army. He served in the infantry during WWII. After serving his country Fred married the love of his life Mabel Juergens, on June 9, 1946, at St. John’s Catholic Church in Fayetteville.

Fred had a very active life and was involved in the community over the years. Fred enjoyed hunting, loved to fly, and was a cattleman and rancher. He was a member of St. John’s Catholic Church in Fayetteville, life time member of the National Rifle Association, Texas Rifle Association and SPJST Lodge 1 of Fayetteville. Fred served as City Marshall of Fayetteville and was constable of precinct 1 and 2 of Fayette County. He drove a school bus for 10 years at Fayetteville ISD. Fred and Mabel had a dairy farm for 18 years.

He was preceded in death by his parents Fred and Wilma Hetzel Knippel Sr; sister Dainty Jackson and brother in law Abner Jackson.

Funeral services will be held Saturday November 12, 2011, at 10:00 AM at St. John’s Catholic Church in Fayetteville.

To order memorial trees or send flowers to the family in memory of Fred Knippel Jr, please visit our flower store.