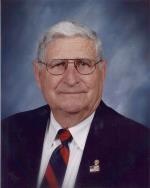 Frank Richard Kruppa, 86, of La Grange died Sunday, January 26, 2014, at St. Mark’s Medical Center in La Grange.
Frank was born in Holman, December 7, 1927, the son of Richard Kruppa and Martha (Adamcik) Kruppa. He married Georgia Vavra on June 20, 1949 in Dubina.
Frank graduated from La Grange High School in 1945.
Frank was then drafted into the Army and was inducted on March 18, 1946. While in the Army, Frank received a World War II Victory Medal and Army of Occupation Medal.

He also served in Korea with Headquarters Company, 657th Engineer Survey Battalion, Korea. He worked to maintain supplies and equipment for headquarters company. He was discharged from the Army in March 28, 1947 at Camp Beale, California.

After his Army career, Frank was employed by Brasher Motor Company in La Grange as a Car Salesman. Later, he was appointed Manager of the La Grange location. He retired from the Brasher Motor Company on October 2, 1993 after 46 years of service. He continued to sell cars to his friends and family for another ten years.
Frank was a loving husband, father, grandfather and great-grandfather to his family. He was a devout Catholic at Queen of the Holy Rosary Catholic Church in Hostyn. He was an avid domino and tarocks player and loved to listen and dance to polka music. He was a member of the local lodge of the RVOS Farm Mutual Insurance as well as a member of the Knights of Columbus, KJT, and Veterans of Foreign Wars (VFW).

He is preceded in death by his loving wife Georgia of 63 years, and is survived by his daughter and son-in-law Marie and Ronald Von Minden of La Grange; son and daughter-in-law Gene and Beverly Kruppa of Plum; son and daughter-in-law Don and Theresa Kruppa of San Antonio; six (6) grandchildren -- Wendy and husband, Donnie Becka of La Grange; Stacy and husband, Tom Wahle, of The Woodlands; Erica and husband, Robert Dudley, of La Grange; Elliott Kruppa and wife Jennifer of Houston; Courtney Kruppa of Irving and Stephen Kruppa of College Station; six great grandchildren, Madison and Ryan Becka, Robert Dudley IV, Nathan and Caroline Wahle and Elijah Kruppa; and one brother Bernard Kruppa of Temple.
He was preceded in death by his parents, and his brothers, Edwin and Henry Kruppa.
Visitation will be held Wednesday, January 29, 2014 from 7 am to 3 pm at Fayette Memorial Funeral Home in La Grange. Family will receive friends from 5-7 p.m and Rosary will be recited at 7:00 pm at the Holy Rosary Catholic Church in Hostyn.
Funeral services will be held at Holy Rosary Catholic Church at Hostyn on Thursday, January 30, 2014 at 10 am. Burial will follow at Holy Rosary Catholic Cemetery in Hostyn.
In lieu of flowers, memorial contributions may be made to Holy Rosary Catholic Church Building Fund, 936 FM 2436, La Grange, Texas 78945; or St. Mark’s Medical Center, One St. Mark’s Place, La Grange, Texas 78945.
Fayette Memorial Funeral Home of La Grange is in charge of arrangements.

To order memorial trees or send flowers to the family in memory of Frank Kruppa, please visit our flower store.