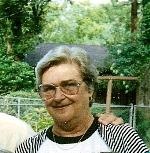 Lifelong La Grange resident Florice (Flo) Nanette Zapalac passed away on Saturday, February 6, 2010 at the Warm Springs Rehabilitation Hospital in Luling. She was 83.

Mrs. Zapalac was born in La Grange on January 19, 1927, the daughter of Mike B. Roberts and Evelyn Mennike Roberts. She was married to Lester H.(Buddy) Zapalac on June 17, 1947. A member of the Rutersville Hermann Sons Lodge and the La Grange VFW Auxilliary for several years, Mrs Zapalac and her late husband owned and operated the former La Grange Journal for many years. She was employed at Tietjen’s Inc. in Rutersville until two years ago when she became a resident of Monument Hill Nursing Home in La Grange .

Mrs. Zapalac had resided in the La Grange area her entire life.

Services for Florice will be held at the Fayette Memorial Funeral Home Chapel on Thursday February 11, 2010 at 2:00 PM with interment in the La Grange City Cemetery.

Memorial contributions may be made to the Gardenia Janssen Animal Shelter in La Grange or the La Grange Relay for Life.

To order memorial trees or send flowers to the family in memory of Florice Zapalac, please visit our flower store.