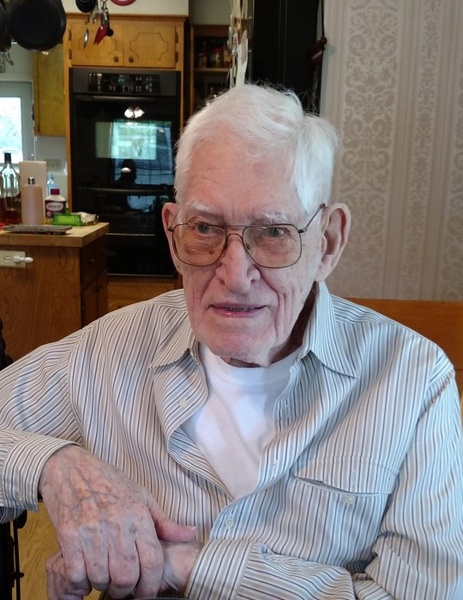 Evans August Beaullieu, "Uncle Bobby", joined the choir of angels singing praises to God on August 19, 2017. He departed this world from his earthly home of Sandra Rochelle Hinman and husband David Hinman. Evans was 97 years old.
He was born at home near Bayou Teche in the town of Jeanerette, Louisiana. He always referred to himself as just a country boy. He had one sister, Shirley Beaullieu Wagner since deceased. He was married for 40 years to Elizabeth, "Bessie" Desonier also of Jenerette, also deceased.
As an infant he was baptized Catholic at St. John the Evangelist Church in Jeanerette. He developed polio at age six, crippling his left leg requiring the use of a crutch from then on. He finished high school at the Catholic school taught by the Jesuit Brothers.
He continued to live with his parents and worked at St John's Church as a lay minister, ringing the church bells at 6am, noon, and 6pm, preparing the elements and vestments of the priest for Mass or other Church activities. He is also known for his voice that filled the Church at many weddings and funerals. He said that would be his gift to the brides and grooms and his farewell to the dead.
He later took a job as typists and clerk for Western Union. In 1955 he began working for Cleo Electric in Jeanerette as a clerk until 1978. At that time he retired to care for his wife, Bessie, until her death in 1996.
Evans, Uncle Bobby, was a devout Catholic walking in the Light of Jesus.  And always giving thanks to God the Father for what he had. He was a kind and gentle man with a warm heart and smile for all. He loved talking about his country way of life. Especially when he had someone else that could speak Cajun French with him. And he loved his Cajun foods!
Evans is survived by his niece and husband David and Sandra Hinman, a step granddaughter, Stacy Purcell and step grandson, Brian Boutte both of Houston, Texas.
His remains will be returned to his birthplace and interment will be in the St.John the Evangelist Catholic cemetery at a later date this year.
The family wish to thank all of the many people who supported and prayed for Evans during his final days. Special recognition is extended to Dr.Borgstedte and to each individual from Hospice Brazos Valley who showed him compassion, kindness, care and love.


Memorials may be made to Hospice Brazos Valley of La Grange, for Masses said in his name, or to the charity of one's choice.

To order memorial trees or send flowers to the family in memory of Evans Beaullieu, please visit our flower store.