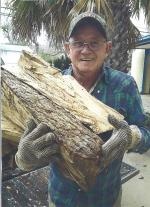 Eugene Walter Polasek, age 71, of La Grange, passed away on November 14, 2013 in La Grange.
Gene was born on September 13, 1942. He was a self-employed handyman and a member of St, John Lutheran Church in Ellinger. He served his country in the United States Navy.
He is survived by three sons; Wesley Polasek and wife Debbie of Liberty, Stanley Polasek of La Grange and Glen Polasek of La Grange; a step-brother, Jerry Polasek; twelve grandchildren; numerous nieces and nephews and special friend, Leona Parks of Fayetteville, also survive.
Gene was preceded in death by his parents Frances Miller Polasek and Garland Polasek and a son, Darrel Polasek.
Visitation is scheduled for Sunday November 17, 2013, from 12:00 PM until 8:00 PM at Fayette Memorial Funeral Home in La Grange. The family will receive visitors from 5:00 PM until 8:00 PM.
Funeral services are scheduled for Monday November 18, 2013, at 10:00 AM at St. John Lutheran Church in Rutersville.
Interment will follow in the Rutersville Cemetery.
Memorial contributions may be made to St. John Lutheran Church.

To order memorial trees or send flowers to the family in memory of Eugene Polasek, please visit our flower store.