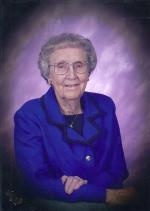 Elsie A. Weishuhn age 95, of La Grange, passed away on November 13, 2013.
Elsie Minnie (Albers) Weishuhn was born on June 17, 1918 at Waldeck, the daughter of the late Adolph and Marie Fiedler Albers. She was baptized on January 1, 1923 by the Rev. Carl Baer, who confirmed her on September 6, 1931 in the Evangelical Lutheran Church in Waldeck On December 16, 1937 she was united in marriage with Wilton Weishuhn by the Rev. Carl Baer. They were married almost 62 years. She was a homemaker, loved gardening, making quilts and cooking for her family. She was a lifetime member of the Waldeck Evangelical Lutheran Church where she taught Sunday school for 28 years sang in the church choir and was a Guild officer time and again.
She is survived by two sons; Glenroy Weishuhn and wife Frances of Woodworth LA., Arlen Weishuhn and wife LaDonna of Tijeras, NM; four grandchildren, Glenda Norris and husband Bill, Dale Weishuhn of Alexandria, LA., Danae Weishuhn and Rebekah (Becky) Weishuhn of Tijeras, NM., four great-grandchildren; Kayla , Lauren, Lindsey and Cody Weishuhn, all of Alexandria, LA.; one great-grandchild, Cadence Holloway of Alexandria, LA., one brother, Elvis Albers and wife Laverne of Cleburne; numerous nieces and nephews also survive.
She was preceded in death by her parents; husband; infant son, Bennie Allan; son, Kenneth Ray; five brothers, Emil, Eddie, Alfred, Milton and Elton Albers; two sisters, Edna Mueller and Leonora Albers and two sisters-in-laws; Laverne Albers and Milda McLean.
Visitation is scheduled for Saturday November 16, 2013 from 5:00 PM until 8:00 PM at Fayette Memorial Funeral Home in La Grange. The family will receive visitors at this time.
Funeral services are scheduled for Sunday November 17, 2013 at 2:00 PM at Waldeck Evangelical Lutheran Church in Waldeck.
Interment will follow in the Waldeck Cemetery.
Memorial contributions may be made to the Waldeck Evangelical Lutheran Church in Waldeck.

To order memorial trees or send flowers to the family in memory of Elsie Weishuhn, please visit our flower store.