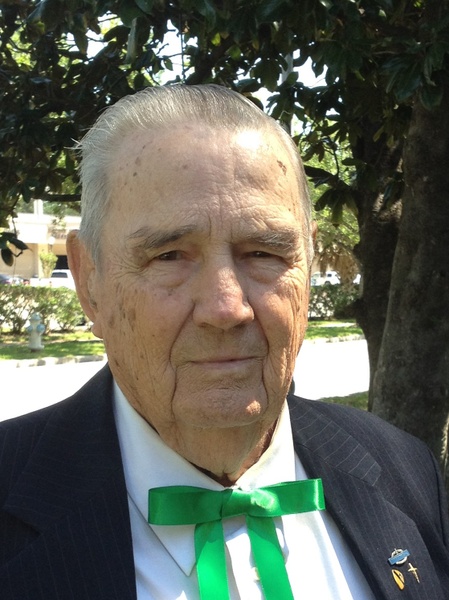 Edwin “Ed” Paul Vecera, an active and clear-headed 94, ascended to his Heavenly reward Saturday November 17, 2018. He suffered an unexpected heart attack Friday but spent Saturday in good spirits in the ICU, visiting with family when not bothered by doctors, even enjoying a last snack of cookies and vanilla ice cream while chatting up the nurses. Born 9/16/1924 in Austin, Texas where his mother had taken two of his siblings for rabies treatment, he grew up on the family farm in Plum, Texas which he continued to love and maintain.

Predeceased by parents Frank and Anne (Srubar) Vecera and wife of 63 years Evelyn (that Rainosek girl from across the river) and three siblings.

He is survived by sister Edith Juenger, children Eugene (Myrna), Nancy (Thom Clark), Larry, Robert (Elise) and Denise (friend Todd who was very helpful to dad in recent years.) Also survived by 5 grandchildren and 4 great-grandchildren, numerous cousins, nieces and nephews, among them Daniel and Susan Vecera who have so unselfishly given outstanding support to dad over the years.

Ed was proud to call himself a farmer, never happier than on his tractor. He was a proud Texas Czech who along with Evelyn helped start the Czech Heritage Singers of Houston. Growing up during the depression he wasn’t afforded the chance to attend school past the eighth grade but worked tirelessly day and night (literally) to ensure that his five children graduated Catholic high school and were able to go on to college.

PFC Edwin Vecera was a WWII combat veteran, heavy machine gunner fighting in the jungles of the Philippines 1944-45 and then in Occupied Japan 1945-46. He was not only bombed and sniped at by the enemy but once was fired at at point blank range by a panicky fellow GI. He firmly believed prayer, especially to the Blessed Virgin, is what got him thru it all in one piece. He was endeared to the people of the Philippines and long ago lost any animosity for the wartime enemies.

Mass will be held Friday, November 23rd at 11:00 AM at Sts. Peter and Paul Church in Plum. Due to Thanksgiving, the rosary will be held Friday at 6:00 PM at Holy Ghost Catholic Church in Houston, Texas which was Ed’s home parish since moving to Houston to build his career as a master carpenter and grow his family.

Donations can be made to the church of your choice whether brick and mortar like Saints Peter and Paul, Holy Rosary, or online like EWTN because all of these were important to our Dad.

Ed was a friend to everyone, a foe only to undone work. He was a loyal husband and a loving and providing father. He will be missed.

To order memorial trees or send flowers to the family in memory of Edwin Vecera, please visit our flower store.