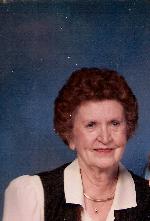 Dorene Louise Folterman Struve, age 96, passed away on April 3, 2009. Dorene was born in La Grange, Texas on July 21, 1912. She was a devoted daughter to her parents, Henry and Annie (Nollkamper) Folterman.

She has one brother, Milton Koenecke, who preceded her in death. Dorene was married to Louis Struve in 1931. They were married for thirty-six years, when Louis passed away in 1967. Dorene and Louis had a daughter, Joann Struve Jarl, who was the joy of their lives. Joann passed away at the much too young age of 54 in 1986.

Dorene worked for Lauterstein’s, which later became Gindler’s, for over 50 years. She retired from the store in 1986. She was a member of St. Paul Lutheran Church.

Dorene was full of life and loved attending the many social gatherings in La Grange. She was an accomplished bridge player and was part of many bridge groups throughout her lifetime. In 1987, her son-in-law, Wallace Jarl, retired and came to live in La Grange. They both loved to travel and were always planning their next adventure.

Funeral services are scheduled for 11:00 a.m. on Monday, April 6, 2009 at Fayette Memorial Funeral Home Chapel in La Grange. Reverend Sid Roden will officiate at the service.

Interment will be in the La Grange City Cemetery.

Memorial mays be made to the St. Paul Lutheran Church or Brazos Valley Hospice or one’s favorite charity.

To order memorial trees or send flowers to the family in memory of Dorene Struve, please visit our flower store.