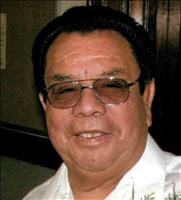 DONATO HERRERA
Donato Herrera, 72, of La Grange, formerly of Hale Center, Texas passed away January 1, 2016 at his home surrounded by his family.
Donato was born August 7, 1943 in Yoakum, Texas to Juana Martinez and Ines Herrera.
Funeral services will be held at 11:00 am, Monday , January 4, 2016 in the Fayette Memorial Funeral Home Chapel. Interment will follow in the La Grange City Cemetery. Visitation will be from noon until 7:00 p.m. Sunday January, 3rd in the Fayette Memorial Funeral Home Chapel with the family present from 5:00 p.m. until 7:00 p.m.
Donato was a retired farmer from Gloyna farms, and he loved fishing, mechanicing, gardening, and visiting with family and friends. He was a member of the Iglasia Bautista in Muldoon. He married Olga Rodriguez on September 27, 1968 in Sudan, Texas.
Donato is survived by his wife, Olga Herrera of La Grange, and their 7 children, Delores and Doug Hogan, Ralph Herrera, Victor and Teresa Herrera, Eva Herrera and Rick Levitt, Trino and Sandra Herrera, Judy and Andy Blaha, Michael and Casey Herrera, and Andrea and Antonio Longoria.
1 half brother John Gerrera, 18 grandchildren and 8 great grandchildren.
He was preceded in death by his parents, one sister and 1 half brother.
Family suggests memorials to the American Cancer Society, P.O. Box 22718 Oklahoma City, Oklahoma 73123-1718

To order memorial trees or send flowers to the family in memory of Donato Herrera, please visit our flower store.