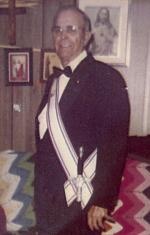 Delmer J. Mudd, of West Point, passed away on October 18, 2012, at the age of 90.
Delmer was born on March 22, 1922, to George Mudd and Caroline Augustus Mudd, in Dilworth, Texas. He was a retired railroad engineer.
He served in the Navy during World War II. Delmer was married to Dorothy Sutter on October 2, 1946. Delmer enjoyed bowling at La Grange Lanes in the Senior League, hunting, gardening and canning. He was a member of St. Peter & Paul Catholic Church in Plum, a 4th degree member of the Knights of Columbus, American Legion and a lifetime member of the VFW.
Delmer is survived by two daughters; Marilyn Martinez of La Grange and Sandra Paulus of West Point; one son; Delmer J. Mudd Jr. of West Point; two sisters, Gladys Mudd and Wanda Roso and a brother, Leon Mudd; seven grandchildren and nine great-grandchildren also survive.
Visitation is scheduled for Sunday October 21, 2012, from 3:00 PM until 8:00 PM, at Fayette Memorial Funeral Home in La Grange. The family will receive visitors at this time. Rosary will be recited at 7:00 PM.
Delmer was preceded in death by his parents; George & Caroline Mudd, wife; Dorothy and six brothers.
Funeral services are scheduled for 11:00 AM, Monday October 22, 2012, at St. Peter and Paul Catholic Church in Plum.
Interment will follow in the church cemetery.
Memorial contributions may be made to Right-to Life masses or the charity of one’s choice.

To order memorial trees or send flowers to the family in memory of Delmer Mudd, please visit our flower store.