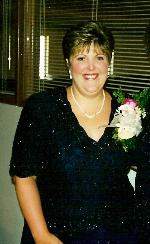 Darla Polasek, age 44, of Weimar passed away on Tuesday, June 17, 2008. She was born on June 23, 1963 to parents, Phillip C. Rogers and Vivian F. (Gary) Rogers. Darla Polasek was an accountant and enjoyed spending time with her family.

Visitation is scheduled for Thursday, June 19, 2008 from 9:00 a.m. until 8:00 p.m. at Fayette Memorial Funeral Home. The family will receive visitors from 5:00 p.m. until 8:00 p.m. on Thursday evening. The funeral service is scheduled for Friday, June 20, 2008 at 10:00 a.m. at the Second Baptist Church in La Grange with Brian Hawkins and Dan Gilmore officiating. Interment will be in the Cedar Cemetery near Hostyn.

Memorials may be made to Second Baptist Church or the charity of your choice.

To order memorial trees or send flowers to the family in memory of Darla Polasek, please visit our flower store.