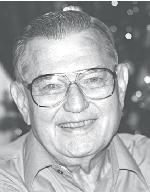 Daniel Joseph Rohan, 81, died the 20th of June, 2011 at Care Inn nursing home, La Grange, Texas.
Daniel was born on September 27, 1929, the son of Fred and Annie Kubala Rohan. He married Delphine Dornak on April 28, 1954, at St. Paul's Catholic Church in Smithville.
After serving in the Air Force during the Korean War as a guided missile technician instructor, he worked for Adamcik's as a TV serviceman. He then worked at Fairchild Graphic Equipment for 10 years servicing newspaper equipment. He then worked for 39 years owning Rohan TV and Antiques, later Dan & Dell's Sentimental Journey Antiques and Collectibles.
He is survived by his wife, Delphine, who Daniel had been married to for 57 years at the time of his death. He is the proud father of three sons- Dennis Rohan and wife Judy, Michael Rohan and wife Heidi and Richard. To this Daniel had three grandsons(Aaron, Elliot and Jacob) and two granddaughters(Kara and Micah).
Daniel was preceded in death by his parents, two sisters, Mildred Von Minden and Estella Svrcek of Fayetteville; two brothers, John (of La grange) and Milton Rohan (of Edna).
Visitation is scheduled for Wednesday June 22, 2011, from 8:00 AM until 8:00 PM, at Fayette Memorial Funeral Home in La Grange. Family will receive visitors from 5:00 PM until 6:00 PM. Rosary will be recited at 6:30 PM.

Funeral Mass will be held at 2:00 PM, on Thursday June 23, 2011, at Sacred Heart Catholic Church in La Grange with Rev. Joseph Varickamackal officiating.

Interment will follow at the La Grange City Cemetery.

Memorial contributions may be made to Catholic Daughters of the Americas, Court Annunciation #1962 Scholarship Fund "In Memory of Daniel Rohan" or the charity of one's choice.
To order memorial trees or send flowers to the family in memory of Daniel Rohan, please visit our flower store.